39 Percent Of Businesses Worldwide Have Blockchain In Production, Deloitte Reports

One of the biggest auditing companies to date, Deloitte, published the results from its “2020 Global Blockchain Survey”, which took place between 6th February and 3rd March, 2020. The results show that 39% of the 1,488 surveyed executives and large-scale business owners admit they have already begun to research and develop blockchain products and services for and into their companies. The figures are up with 16% from last year, with the percentage increasing to 41% when including companies with over $100 million in yearly revenue.

The auditing giant also noted that many companies are making blockchain technology a key priority for their business, as well as the potential that digital assets have and may have in the near future.

“Eighty-nine percent of the respondents stated that digital assets could be of great importance to the underlying industries over the next three years.”, Deloitte’s report stated. “Over fifty percent report blockchain and digital assets will be very important”, the report added. 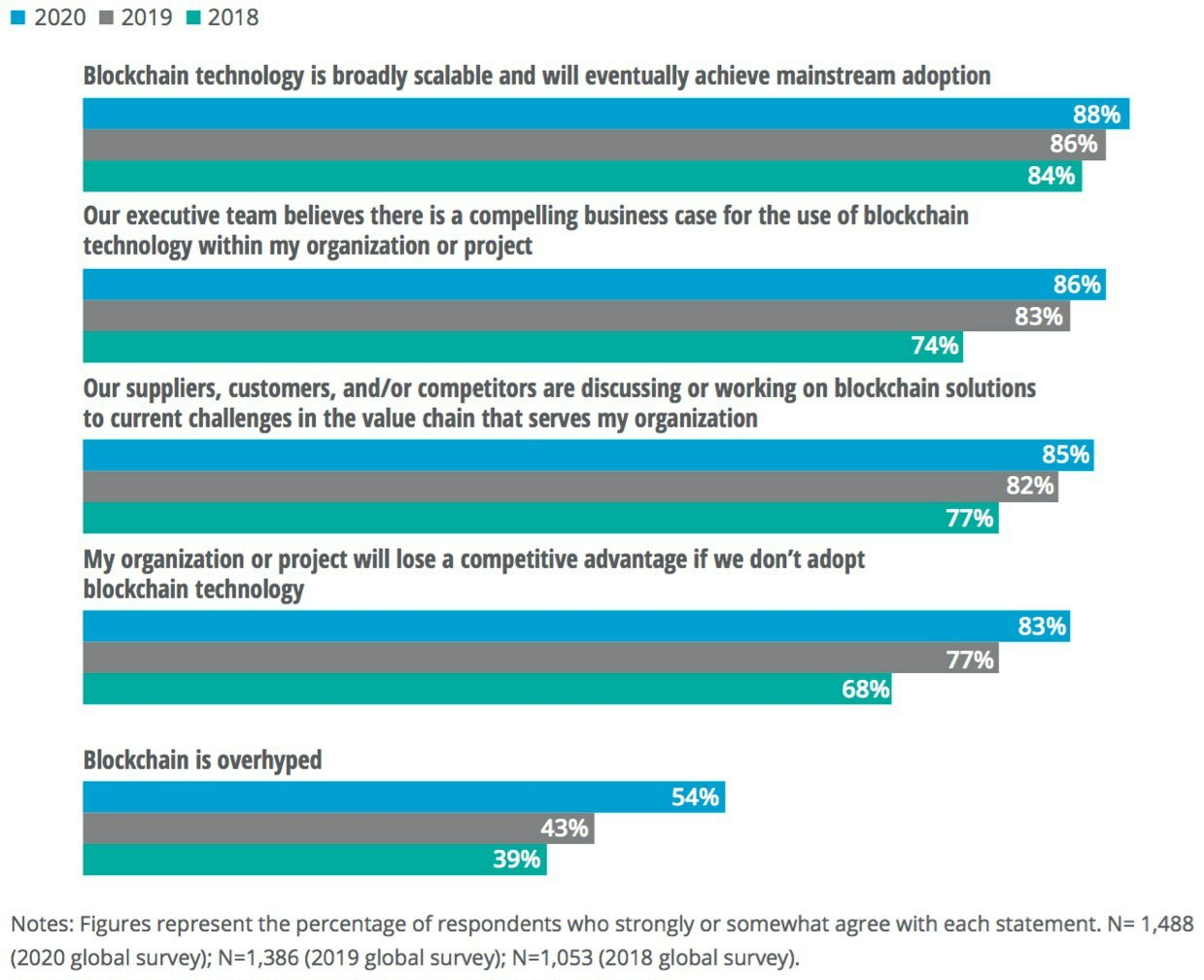 Also, Deloitte made a correlation between company interest in blockchain technology and the hiring practices of the companies. The report noted that 82% of the audited companies would “hire people with blockchain expertise” in the next 12 months. Almost the same percentage of respondents admit that they may lose their competitive advantage if they fail to adopt blockchain technology.

Interestingly, the survey data showed that 54% of the companies consider blockchain technology as overhyped, which marks an increase from previous years. Records show that the levels in 2019 were 43% and in 2018 – 39%.

Blockchain adoption is however, not equally distributed from one country to another. China, for example, leads the pack with 59% of companies that included blockchain in production, while the percentage in the U.S. is almost twice lower – 31%. Chinese companies also strongly believe that digital assets would replace fiat currencies over the next decade.

Meanwhile, the number of Bitcoin ATMs worldwide surpassed 8,000 with 1,000 ATMs deployed since March 2020. According to CoinATMRadar, 8,208 terminals in 73 countries allow users to cash out Bitcoin and altcoins into fiat currencies, with over 6,000 ATMs currently operating in the United States alone.