Until The V2 Update, Aave Was The Only Major DeFi Platform Without A Yield Farming Option

Liquidity mining became a hot topic in the “DeFi Summer” of 2020, as Compound first introduced that option. Compound decided to reward lenders with its native COMP governance token, which made Compound the biggest lender in the Ethereum-based DeFi ecosystem.

Compound’s example was quickly followed by other DeFi protocols, however – without any activities coming from Aave. Now, the open-source protocol is stepping into the yield farming realm with an automated market maker (AMM). In exchange for the staked Ethereum, Wrapped Bitcoin, or stablecoins like DAI, GUSD, USDC, and USDT, the platform will pay its users in Staked Aave (stkAAVE).

However, Aave is no stranger to liquidity mining, as currently, Aave users had the option to earn interest for depositing Aave’s native token. Now, Aave would expand its staking frontiers, adding the new functionality.

The Staked Aave (stkAAVE) is a specialized staking token, which is pegged to Aave’s native token price of $431.39. However, in order to convert their funds into Aave native tokens, users have to wait 10 days before doing it.

According to Vinod, the proposal and the bigger rewards for liquidity mining on Aave’s V2 protocol would help users to switch to the new version of the protocol, which launched in December 2020. The venture capitalist noted that due to the high gas fees on Ethereum’s blockchain, users decided to hold their tokens.

“By introducing liquidity mining rewards only on Aave v2, liquidity providers and borrowers will naturally migrate toward the more optimized version,” Vinod added. 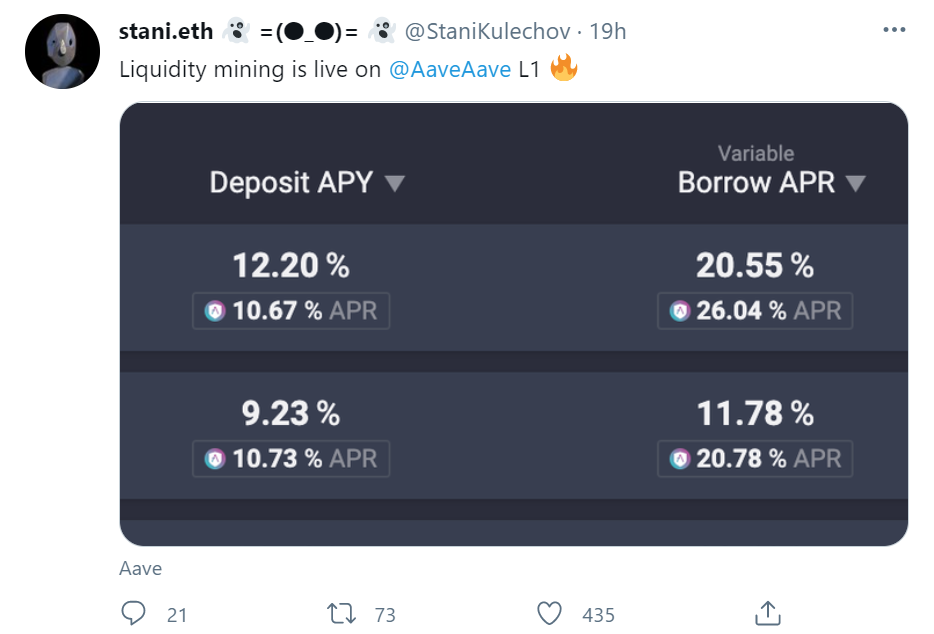 The interest rates for borrowing and lending on Aave v2 are boosted, as lenders would receive 18% on depositing Tether (USDT), while borrowers get up to 36%. In contrast, the v1 protocol offers interest rates of 1% and 7%, respectively.

Aave would distribute up to 2,200 stkAAVE tokens, worth around $1 million, every day, until July 15. The distribution would be proportionally shared between the six liquidity markets, depending on their size. When the distribution ends, users would vote to renew, discontinue, or amend the program.