Americans Are Using Their Stimulus To Purchase Bitcoin

The latest COVID-19 outbreak in the United States caused the government to take severe counteractions, including giving away $2 trillion in stimulus packages.

However, the $1,200 stimulus went into the crypto sector, as Americans are massively buying Bitcoin and other cryptocurrencies with the governmental help. Coinbase’s CEO Brian Armstrong tweeted a graph, showing a 300-percent increase in transactions, totaling $1,200. Binance also confirmed such a correlation on its trading platform. 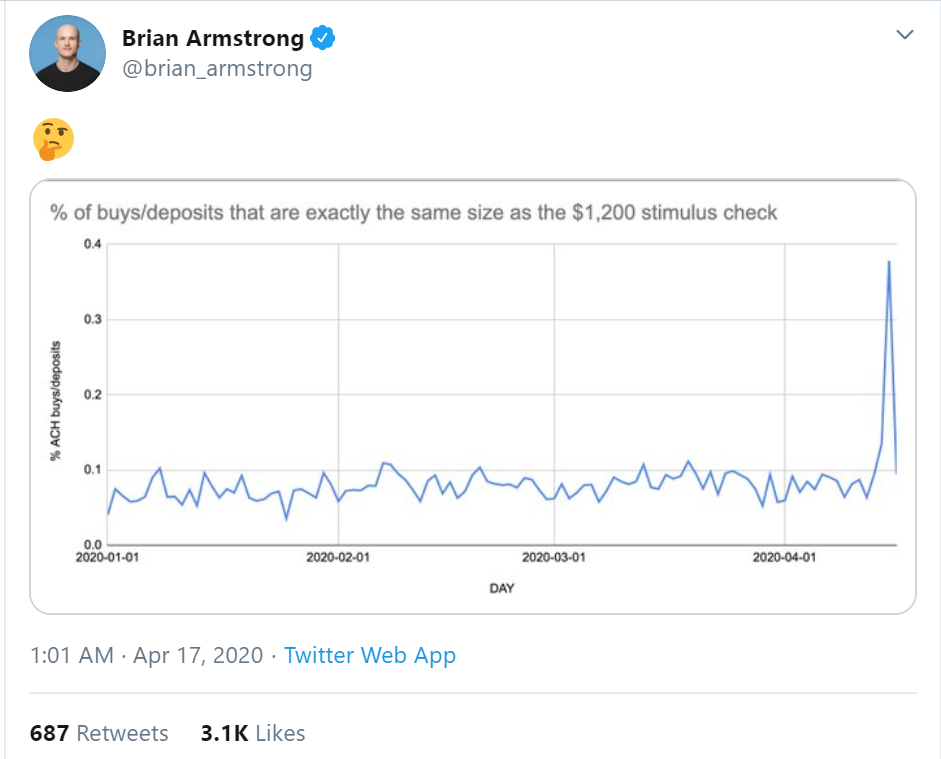 Financial columnist Paddy Baker further confirmed the suspicions for a direct correlation between buying cryptocurrencies and stimulus payments. Baker received information from Binance.US representative, stating that “in the past couple of days, there is a noticeable increase in deposits of exactly $1,200.”

The possible reason behind Americans pushing their stimulus packages into the crypto sector is the technical issues found when processing the relief checks. The U.S. government stated that over 80 million in stimulus packages, worth an estimated $96 billion, were sent over the course of the past week. However, PayPal account owners raised a flag of concern after the payment processor blocked their access to the stimulus packages. “When the whole economy struggles to get afloat, and the population needs the money more than ever, companies have no right to lock funds, leaving us without access to cash,” Paypal customers report.

It turns out the traditional banking sector is struggling with the settlement of such vast quantities of orders. “The software banks use nowadays is outdated, mostly created decades ago.” a report from Washington Posts reveals.

Washington Post columnists emphasized on the inadequate banking infrastructure, which has been slow to catch up, even with record 2019 profits. “If the current banking system continues to struggle, U.S. citizens won’t be able to conduct simple tasks as paying bills or shopping groceries.”, the report stresses.

Many stimulus receivers actually think the U.S. dollar may devaluate over time, so they are opting for a “decentralized” solution.