Another Delay For Tether And BitFinex Court Trial

Meanwhile, Tether Users Seem To Be Migrating To The Tron Ecosystem, As Tron Grants Lower Fees For Smaller Transactions

IFinex, the parent company behind the Bitfinex crypto exchange and the Tether (USDT), has appealed to the New York Supreme Court for another 30-day trial delay. The reason behind the delay – iFinex wants the 30-day push to compile the documents needed by the Office of the Attorney General (OAG).

However, the documents that iFinex needs to produce were due by January 15, 2021, which marks the deadline of the previous one-month extension. The original date, which iFinex had to comply with and supply the documents was December 16, 2020.

Charles Michael, legal counsel for the defendant, shed some light on the current situation, clarifying that a large portion of the documentation has been already handed over to the OAG. However, “there are still some agreed-upon items that need to be sourced,” according to the attorney.

IFinex also noted that apart from the time needed to source and deliver the documents, there has to be enough time for the OAG to analyze the importance of the provided documentation.

“The parties will need a few more weeks to produce the supplemental information, for OAG to review the production, and to discuss further among themselves what if any further proceedings may be necessary,” the iFinex filing notes.

Over the course of the investigation, the NYAG revealed that a quarter of all Tether issued goes without fiat coverage. However, the accusations didn’t stop Tether from issuing over $24 billion worth of Tether tokens and getting involved in the largest volume of daily crypto spot trading.

Bitfinex’s CTO Paulo Ardoino reminded the crypto community that “Tether is registered and regulated under FinCEN as all the centralized competitors.”

“Strict KYC/AML is applied to all Tether direct users, as the other main issuers are doing,” Ardoino added, noting that any speculation about Tether being considered as a security is a form of fear, uncertainty, and doubt.

Meanwhile, the total number of Tether transactions on Tron’s blockchain surpassed the count on Ethereum’s blockchain for a third week in a row, which is mainly driven by the high transaction fees on the Ethereum network. 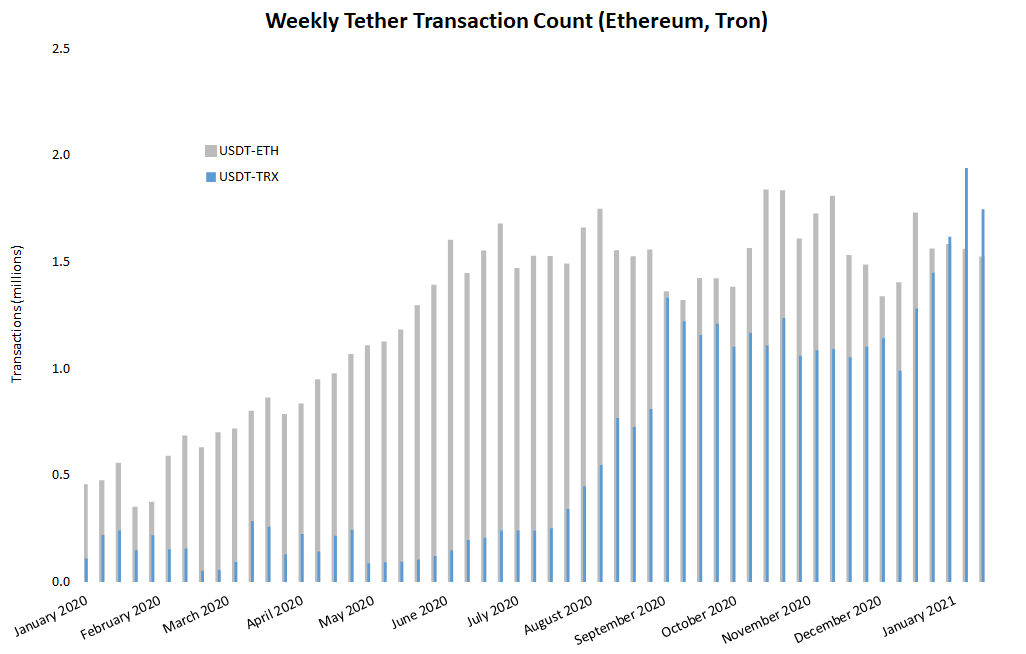 Looking at the graphs, Tether transactions on Ethereum show a constant weekly level of around 1,5 million over the past month. However, the transactions on Tron’s network exploded from 900,000 in mid-December 2020 to over 2 million in the second week of January 2021.

The average price per Ethereum-based transaction managed to hit an all-time high of $19 in mid-January 2021, but quickly settled to a current level of around $8. However, Ethereum still moves more Tether in terms of value, when compared to Tron, which means the latter attracts small-scale transactions due to the lower transaction fees.

“Lately, given the increased cost of Ethereum transactions, it would be logical to use Tron,” Paolo Ardoino concluded.