Bitcoin Falls Below the $7K Mark

On August 30, right after Bitcoin’s short leap above the $7,000 mark, cryptocurrency markets witnessed the top ten coins losing between 1.5% and 5% of market cap.

All the top cryptocurrencies fell into the red category except for 13 altcoins. Bitcoin is still below the $7,000 mark and at that time was trading for $6,942, down by 1.52%. The monthly losses for Bitcoin are estimated at reaching nearly 15%. 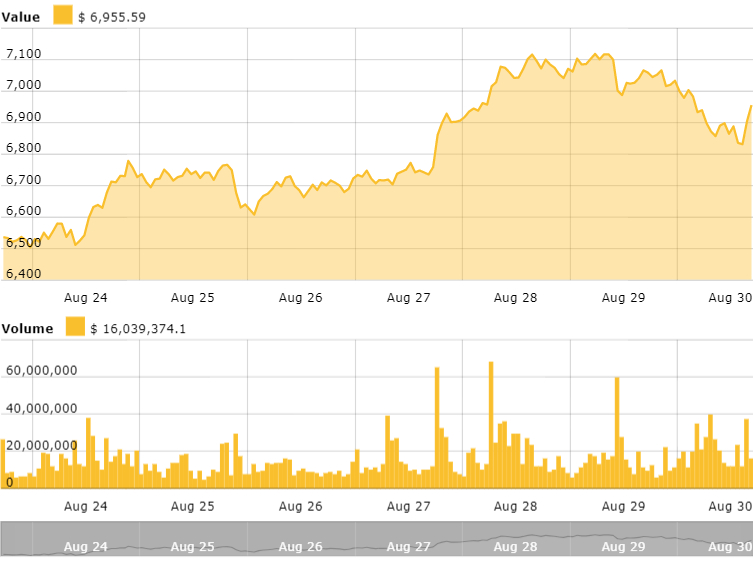 Ethereum (ETH) could not escape the same fate and lost a little over 3% of its value. It was trading for $284. As a result, ETH shifted the past gains it made and reached a monthly loss of 39%.

The price-performance of IOTA (MIOTA) has been remarkable mainly thanks to its partnership with the Japanese conglomerate Fujitsu. The company will launch IOTA‘s proof-of-concept (POC)  to complete audit trail processes. Even with that the crypto lost 4.68% and was trading for $0.71.

The total market capitalization of the uppermost cryptocurrencies was estimated to be around $225 billion which is $8 billion less than the day before.

With a fluctuated market price, government regulators are trying to reach transparency in the industry.  Economic and financial affairs ministers from the EU will gather for a meeting in September to discuss the difficulties faced by digital assets.

The government of Poland has introduced a bill to explain the country‘s crypto taxation policy. Charlie Lee believes the current markets hold a possibility for massive adoption and Anthony Pompliano is sure the cryptocurrency virus is spreading.