The largest cryptocurrency to date, Bitcoin, is preparing for its third halving, scheduled at block 690,000, or around May 14. Meanwhile, Bitcoin miners are putting even greater push for validating transactions, which is often referred to as a bullish sign.

The amount of computer power needed to validate a transaction on Bitcoin’s blockchain peaked with a new all-time high on May 3. Crypto speculators consider the halving event as a catalyst for Bitcoin’s price to explode in the months after the reward cut.

Crypto analysis company Glassnode posted a chart, marking the bullish exponential curve of hashrate activity. Traders and enthusiasts, who believe in the “price follows hashrate” maxima quickly showed their enthusiasm about the peak. Max Keiser, for example, shared a chart from Bitcoin.com, showing his bullish stance on the future price of Bitcoin. 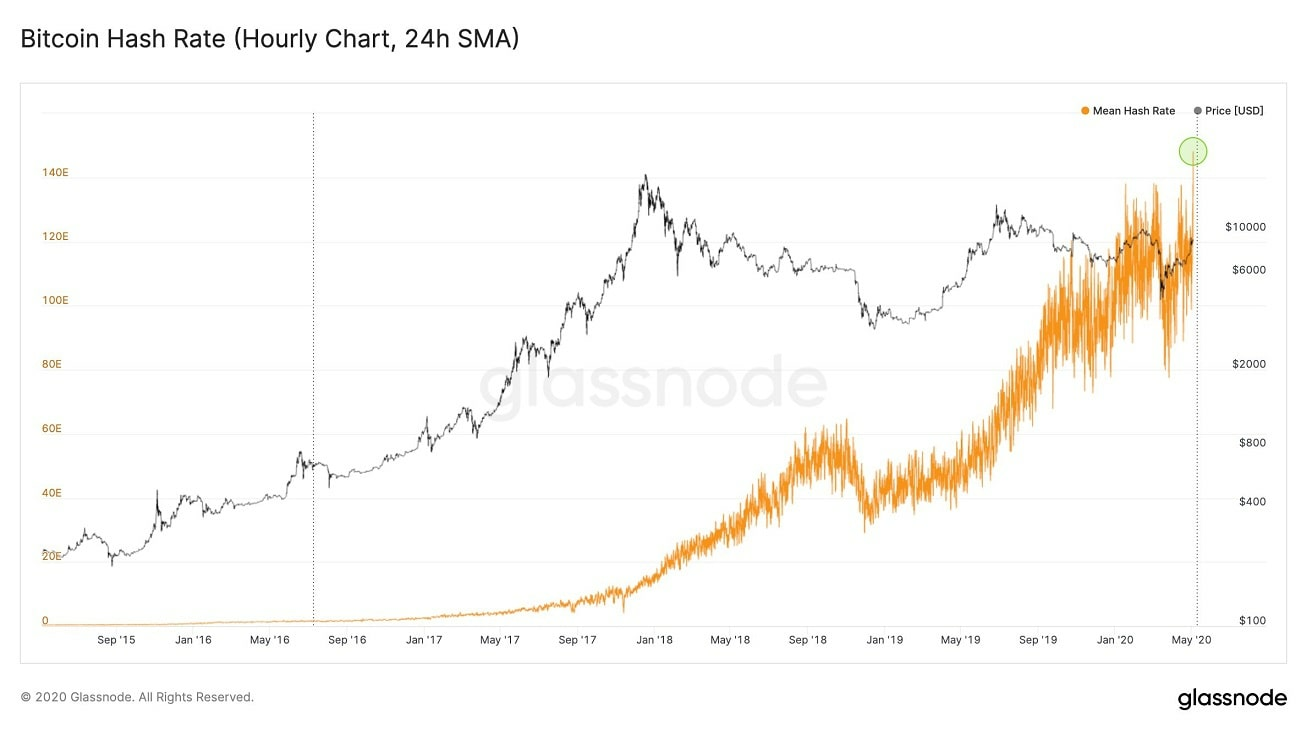 However, the thesis that more miners are entering the computing pool when Bitcoin is approaching its halving may not be entirely accurate. The halving procedure cuts down the reward per mined block in half. Small and mid-sized miners and mining farms may be forced to shut down operations, as they might not clear their costs for operating the rigs. Some experts believe the hashrate push could be a last “attack” towards making a profit before the reward cut.

Meanwhile, other crypto experts consider the spike to be because of the possible price increase anticipation. The CFO of Boston Trading Co. Jeremy Britton explained that with the increasing scarcity for mining precious metals (like Gold, for example), its price increases. The same principle may be applied for Bitcoin, also.

“When Bitcoin’s price crashed in 2019, its price did not drop below $3,000, because miners didn’t want to sell on loss. The expenses for mining a single block on Bitcoin’s network are around $3,000, without considering the costs for equipment and the Internet”, Britton stated.

The next halving, scheduled for May 14, would further increase the costs per mining a BTC block. “The next possible floor for Bitcoin’s price is around $6,000 because miners won’t agree to sell on loss”, Britton concluded.

Pricewise, Bitcoin failed to overcome and settle above $9,000, as the weekend rally broke above the psychological barrier, but was quickly corrected to trade at $8,719.97 currently. The hashrate peak, however, pushed trading volumes up from May 3 with over $8 billion.