The Cost Per Transaction Reached $47, While Over 130,000 Transactions Remain Pending

Bitcoin, the crypto industry’s leading cryptocurrency, showed increased volatility in the past couple of days resulting in a price drop from around $60,000 on April 18, to a weekly low of $52,829.54, which is a 15% price decrease.

Many retail investors decided that this is the right moment to cash out on Bitcoin, pushing trading volumes up, but also clogging up Bitcoin’s blockchain, which resulted in transaction costs skyrocketing as well.

Currently, around 130,000 transactions await to be confirmed by miners, according to data by Johoe-Hoenicke. Analysts like David Gerard noted that the blockchain was congested by Bitcoin holders running “to the exits”. Meanwhile, rumors about the U.S. Department of Treasury commencing actions against large financial institutions for crypto-based money laundering may also be a contribution to the market crash.

To make things worse for the Bitcoin price devaluation, power outages in China’s Xinjiang province, which turned out to be a hotspot for Bitcoin mining, managed to bring Bitcoin transactions almost to a halt. Apart from making fewer overall validators on the Bitcoin blockchain, the power outage contributed to the skyrocketing transaction costs.

Looking at total computing power for the Bitcoin network, or hashrate, data from BitinfoCharts shows that the hashrate plummeted from 145 exahash on April 16 to 105 exahash a day later.

Mining pools like Poolin, for example, dropped 33%, while Antpool and BTC.com dropped 24% and 18% respectively. Binance pool also suffered from a 20% hashrate drop, while some of the smaller Bitcoin mining pools like 1THash recorded negative 24-hour hashrate changes of close to 70%. 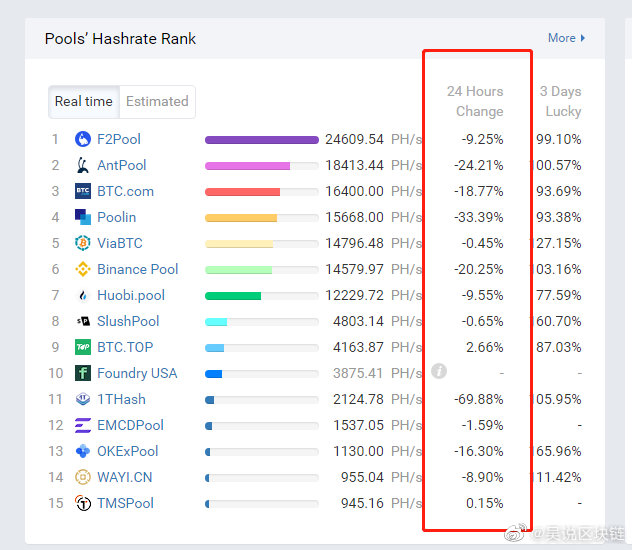 Meanwhile, Luke Sully, CEO of the digital asset treasury specialist Ledgermatic commented on China’s Xinjiang region power outage and the impact it had on Bitcoin’s price. According to Sully, retail traders “may have sold on the news of the power outage in China and not the impact it actually had on the network.”