Nasdaq-listed crypto exchange Coinbase announced that it has acquired open-source cryptocurrency wallet Breadwallet (BRD). The Breadwallet users would be able to migrate to Coinbase in 2022, but no strict timeline has been disclosed.

Breadwallet’s co-founders Adam Traidman and Aaron Voisine noted that since 2014, Breadwallet has played a role in mainstream cryptocurrency adoption with a focus on decentralization, security, and customer-controlled funds.

Traidman and Voisine also added that some of the company’s team members will be moving to the Nasdaq-listed exchange to continue on development work for digital asset wallets.

One of the interesting features of the wallet is the BRD native utility token, which grants additional features to over 10 million users. Coinbase would be setting up a migrational path to self custody with Coinbase Wallet, with a special gift included.

Shortly after the news, Breadwallet’s BRD token skyrocketed over 700% to reach an all-time high of $1.67, trading at around $0.17 per token before the announcement. The BRD price rally is mostly due to bullish sentiment following the acquisition announcement. However, the weekly chart predicted a price increase with or without the announcement as a catalyst. 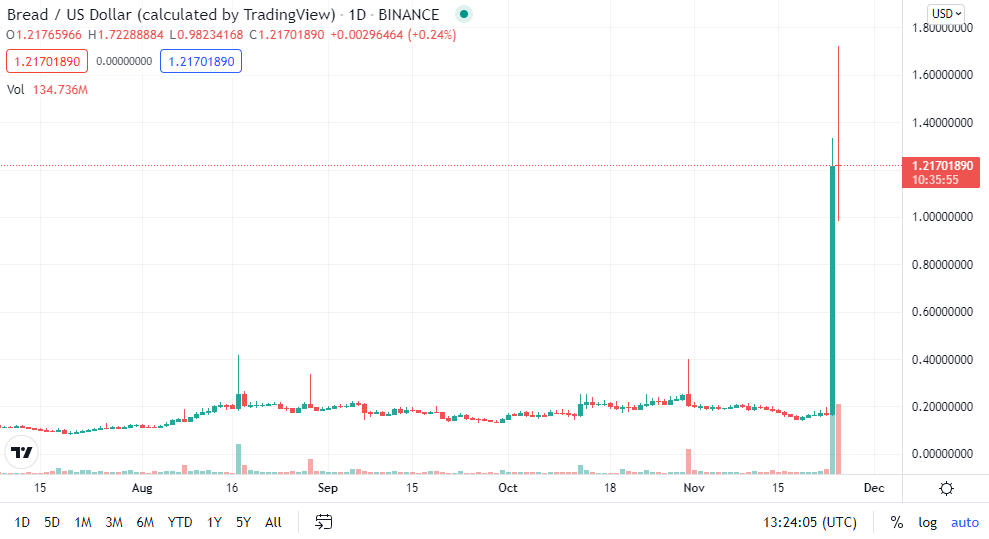 BRD’s price action formed the so-called „head-and-shoulders pattern“ on the weekly chart, suggesting a bullish target of a 91% climb from its neckline. The next target for the token would be the 127.2% Fibonacci retracement level at $2.20.

“This integration with Coinbase wallet is aimed at easing entry barriers for participation in DeFi, particularly in lending, for new users. We believe that Coinbase wallet users will get to explore various yield generating opportunities on EasyFi. We are dedicated towards making DeFi more inclusive and easy-to-use and this integration is a step towards that vision.” Ankitt Gaur, the Founder and CEO of Easy FI Network noted.