However, Technical Analysis Suggests The Push Is Soon To Be Over

The crypto market is witnessing the strongest bear market since its inception, according to data from Glassnode. It turns out the current crypto bear market is pushing many Bitcoin traders into the red, while their sales are at a substantial loss.

The “A Bear of Historic Proportions” analysis from Glassnode highlights three key factors into making the current bear cycle the worst in history for Bitcoin: Bitcoin’s current dip below the 200-day moving average (MA), negative deviation from realized price, and net realized losses. 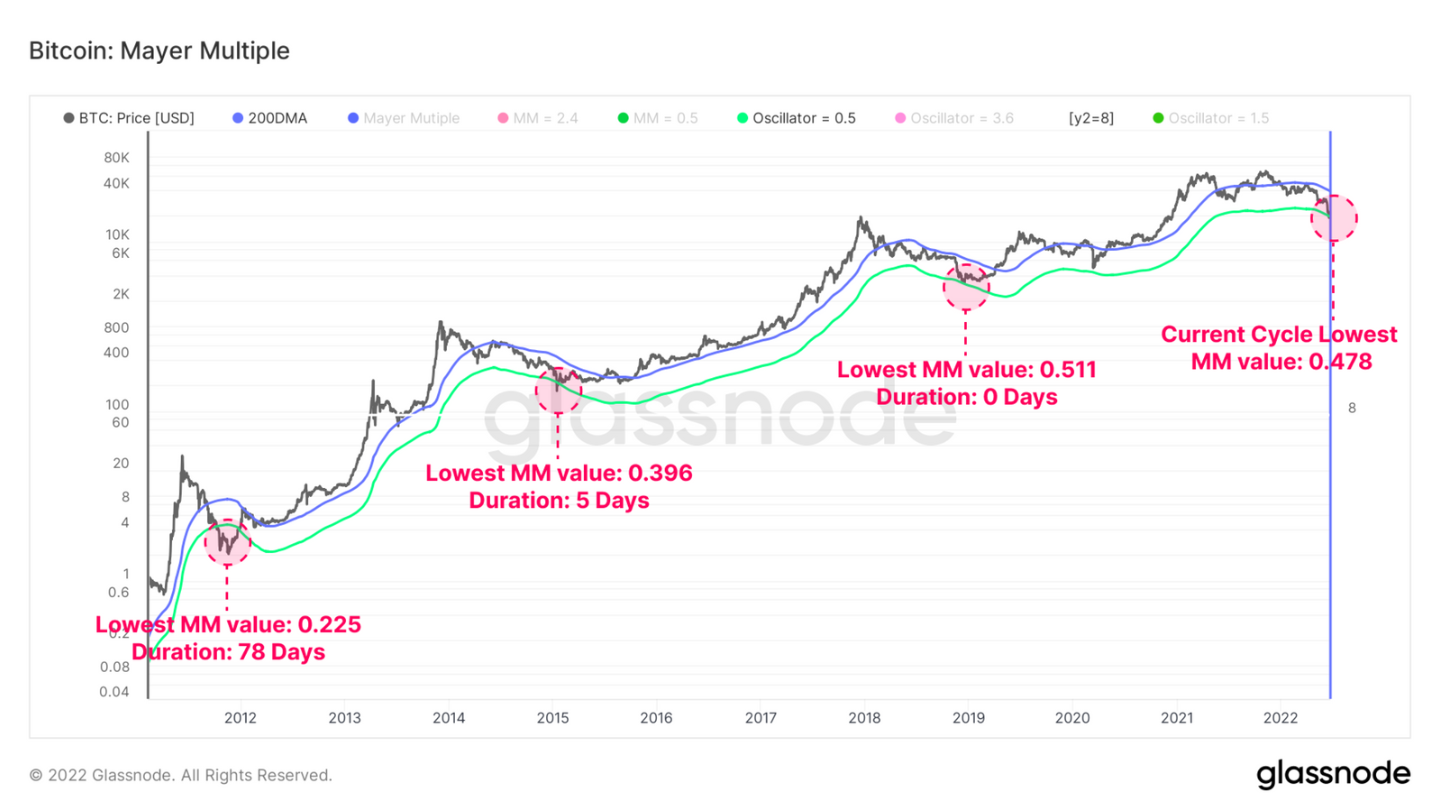 “In the midst of this, Bitcoin and Ethereum have both traded below their previous cycle ATHs which is a first in history,” Glassnode added, emphasizing that one of the strongest factors of a bear market is when the spot price of Bitcoin (BTC) falls below the 200-day Moving Average (MA) value.

The fall below the MA value is an extremely bullish signal, often indicating further losses. Bitcoin falling below 0.5 the Mayer Multiple (MM) is an exceedingly rare occasion that hasn’t happened since 2015, according to the data provider. It turns out that the multiplier, which indicates changes above and below the 200-day MA to show overbought or oversold conditions, is now on the negative side for the world’s largest crypto to date.

Bears are in control

Glassnode also confirmed that the latest market crash is actually severe since spot prices trade below the realized price. The data provided also noted that this is only the third time this has happened in the past six years and the fifth time since Bitcoin’s launch in 2009.

“Spot prices are currently trading at an 11.3% discount to the realized price, signifying that the average market participant is now underwater on their position.”

Furthermore, June 2022 happens to be the worst month in Bitcoin history, as Bitcoin fell below the $20,000 mark, which means that BTC investors locked in “the largest daily USD denominated realized loss in history.”

Not all is lost

Such events clearly indicate the market is in the midst of a capitulation event, which pushed miners to start selling their stashes. However, a capitulation is considered to be the bottom price range of a given bearish cycle.

Indeed, Bitcoin is showing positive signs above the $21,000 zone, reaching a high of $21,780, but the price started a downside correction due to bearish momentum. However, Bitcoin is now consolidating above the $21,000 level and the 100 hourly simple moving average, which is a green flag for investors. In order to defend its position, Bitcoin has to break through the next key resistance, which is near the $21,750 level. Failing to do so may push Bitcoin into another portion of downward motion.

The altcoin leader, Ethereum, is seemingly more bullish, as the second-largest crypto asset to date is consolidating around $1,200, which could be a sort of trampoline for Ethereum bulls to break above resistance zones with ease. As with Bitcoin, Ethereum is currently trading above $1,200 and the 100-hourly simple moving average, which could indicate the start of a race above the $1,250 resistance and even $1,300 at its sight. However, failing to hold above the $1,200 support zone, the fall could send Ethereum near the $1,115 zone.