EOS releases high scam alerts on Twitter and continues to freeze accounts, reaching a total of 24 frozen accounts for the month

Only two weeks after the EOS MainNet launch, the EOS crypto block producers experienced several theft attacks, which led to the freezing of their accounts. Hackers took the opportunity to attack the system during the migration from EOS’s Ethereum blockchain to EOS’s own one.

Users were mainly vulnerable in the first few days after the migration during the registration of their new wallets when many crypto owners reported their private keys as stolen. An increase in the number of incidents led to the launch of an OES911 website where users sought support.

EOS BPs started an immediate investigation, resulting in the freezing of 7 user accounts on the 17th June. This was in conflict with the EOS constitution and despite the goodwill had a negative impact on EOS. Nevertheless, this action prevented the theft of more than $20,000 in EOS present in the accounts.

According to the regulations, though, only the EOS Core Arbitration Forum (ECAF) has the power to decide to freeze an account. Merely five days after the first freeze order, ECAF sent out another order to BPs instructing to freeze another 27 accounts. 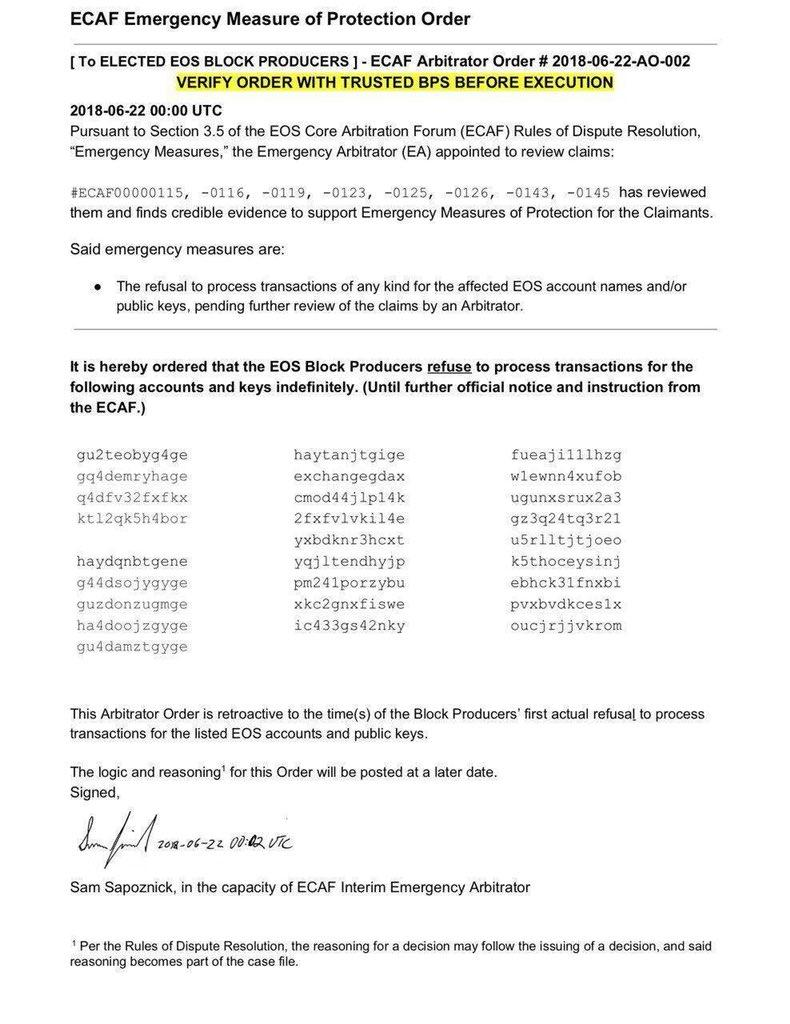 According to the EOS crypto community, these actions are also highly controversial and question the nature of a decentralized blockchain. Some experts compared EOS with Ripple and its’ centralized structure. On the other hand, BPs came out with a statement that the initial ban was required to keep the threat out of the community and some people approve of their decision. EOS hasn’t provided its users with a detailed explanation of the ban yet.

According to the official alert, the EOS community has been targeted by cybercriminals who aim to steal data and property. Also, EOS and Block.one remind that if scammers successfully steal anyone’s private key, they will gain full control of the corresponding account.

EOS reminds that nobody from their network would request anyone’s private keys, passwords, or personal information through any means of contact. Block.one encourages every owner of EOS crypto to be careful when dealing with any person or company that requires personal information or private keys. Additionally, they inform that the company will not review, certify, nor endorse any specific effort.

The alert reminds of the EOS New York’s statement related to the initial bans on June 17, saying that the group would not support any similar actions again if it’s not a serious threat to the entire network. They have even filed a claim against themselves, believing that the interests of the network exceed those of any group or individual.

Also, EOS New York used the case to call for action to all community members. According to their statement on Steemit, EOS doesn’t have the tools to deal with problems like these two bans, while issues happen on a daily basis. In conclusion, the group asked for the development of mechanisms, like the EOS Constitution, that will solve similar issues.

At the time of writing, no other EOS authorities have made any statements on that matter, except the Block.one warning for greater caution of EOS crypto holders.