The Reason, According To A Report, Is The Consistently Full Blocks Which Drive Gas Prices Up To All-Time Highs

The Ethereum community still suffers from higher-than-ever transaction fees which went through a five-fold increase just from the start of 2021.

According to a report published by Coin Metrics, the median gas fees on Ethereum’s blockchain are consistently sitting above $10 for most of the time of 2021. Coin Metrics compared the gas fee with late 2017’s crypto bull run, where the price per transaction reached a mere $5.70.

Comparing gas fees and price increases for the altcoin leader, the report also showed that Ethereum’s price increased 125% since the start of 2021, while gas fees exploded over five times to 532%, if looking at the median transaction costs.

Different actions on the Ethereum’s blockchain require different amounts of gas. For example, a simple ERC-20 token transfer is much more cost-efficient than complex smart contracts, like those of the DeFi realm or, in particular – the automated market maker (AMM) ones. Despite DeFi being among the top gas guzzlers, the root cause is not in the operational mechanism of decentralized finance applications. It is rather on account of the large transaction volumes.

“Since January 2020, the amount of gas used per transaction has trended downwards. This shows that increased transaction complexity is not responsible for high transaction fees,” the report noted. 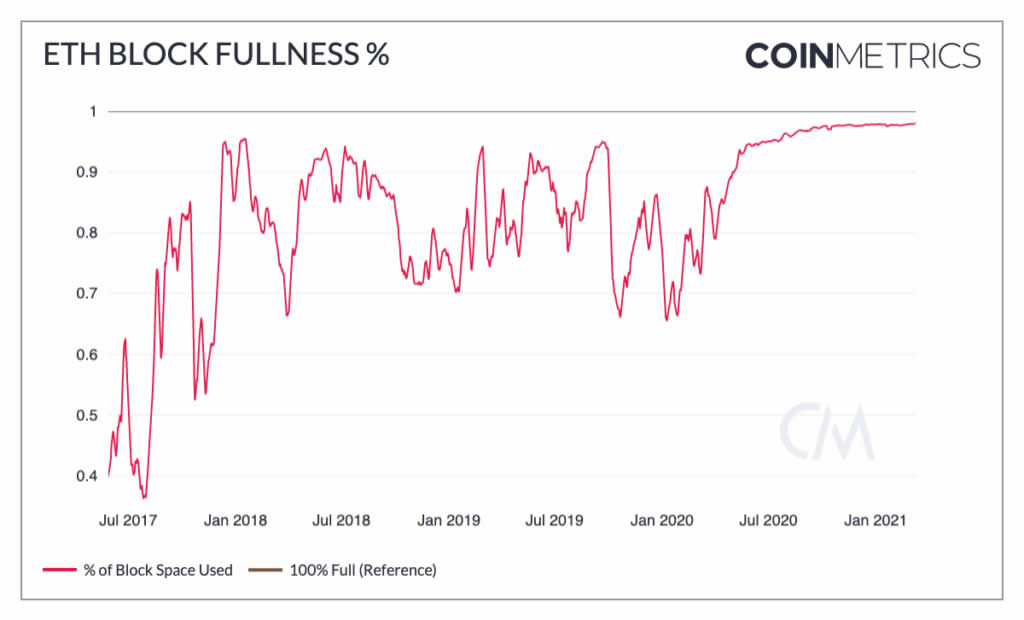 Furthermore, miners need to specify which transactions to process, due to the limited number of transactions per block (around 160 to 200).

“Miners naturally prioritize the transactions with the highest gas prices since they will earn them more money if these transactions are included,” the report added.

Meanwhile, experts are hoping that the upcoming Uniswap v3 can help alleviate the ethereum gas crisis since the AMM is responsible for a big chunk of the transactions happing on the ETH network. Others disagree and state that even with the v3 improvements, the gas cost of swaps on Ethereum mainnet will be only slightly cheaper compared to Uniswap v2 and this won't solve the crisis.