Despite the crypto industry being rather new to the world of finance, many crypto investors believe the leader of the crypto space, Bitcoin, to receive a massive boost in its price.

Silicon Valley VC firm Andreessen Horowitz makes no difference, claiming that “Bitcoin’s fourth price increase cycle is on the way”. The company published a blog post, explaining that the “last price cycle of 2017 gave birth to a vast array of crypto-related projects in various fields.”, and noted that “these projects are set to launch in the near future, which may spawn a fourth Bitcoin cycle”.

Meanwhile, Andreessen Horowitz announced a second, $515 million crypto fund, which makes the total amount of cash for crypto companies to reach over $800 million.

“Despite looking rather chaotic, the cycles created a steady growth of ideas, software innovations, and realized projects. People with a long history in the crypto industry learned to anticipate such cycles.” Andreessen Horowitz stated.

The VC company explained how and when the three past Bitcoin cycles were created and the culprits behind the cycles. During the first cycle, which lasted from 2009 to 2011, Andreessen Horowitz noted a peak in both value and social media activity in July 2011.

“The social media activity, as well as developer activity sustained at an increased level when compared with pre-peak activity. This is not a single event, as we see the same pattern forming in the two cycles after that.” The VC firm also noted that the second cycle peaked in 2013 and ended in 2016. This time, the cycle brought 10-times more startup companies and developers into the crypto space. During the second cycle, the crypto space gave birth to the leader in altcoins, Ethereum, which later became the catalyst of the third cycle.

The third cycle peaked when the crypto community received its most significant interest boost, shooting Bitcoin to an all-time high of over $20,000. The developers and startups again increased ten-fold and the sector received a mass recognition in institutions. 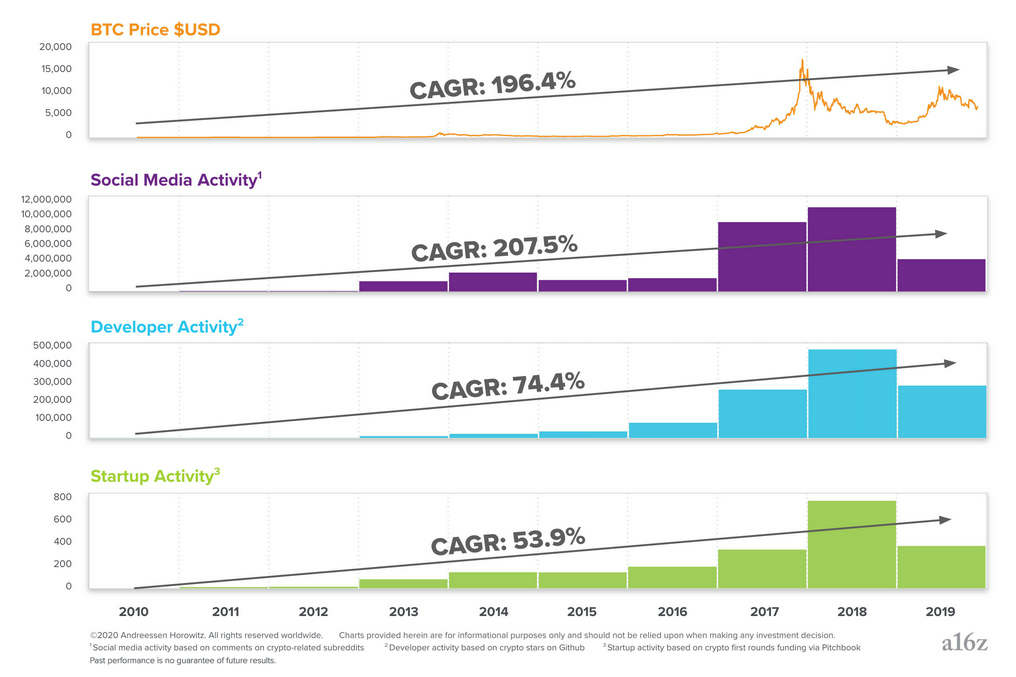 Price CAGR increased by 196.4% from 2010 to the present day. Social media activity received a 207,5% increase, while developer activity and startup activity increased with 74,4% and 53,9%, respectively.