Security is at the forefront of most exchanges, as hackers` skillsets advance at all times. With the progress of hackers` tactics, security features provided by companies evolve as well.

On October 6, CoinMetro announced that the exchange was subject to suspicious activities, alerted by PARSIQ’s trigger system. It turns out, the security breach was done via remote access to a single administrator profile. The breach did not affect cold wallets or databases.

The quick actions of both PARSIQ and CoinMetro prevented a bigger attack, as the hacker tried to withdraw large amounts of various cryptocurrencies. However, PARSIQ’s real-time monitoring technology spotted the anomalies in withdrawals and alerted the CoinMetro core management, who locked down the system, preventing a large-scale theft of funds. The team at PARSIQ made a snapshot of their PRQ tokens on CoinMetro prior to the hack and hard forked the smart contract in order to return the stolen PRQ tokens to their owners.

PARSIQ’s blockchain snapshot technology also helps KuCoin in retrieving projects’ funds from the recent $281 million exchange hack. PARSIQ utilized its innovative technology to do a "snapshot" of the state of its token holders before the KuCoin security breach. A snаpshot contains information about the possessions in the wallet addresses, displaying the exact amount of funds before the breach.

Through the PARSIQ snapshot service, over 81 million NOIA tokens, as well as around 1.7 billion CarVertical (cV) tokens were re-issued with a 1:1 ratio, and token holders that were affected during the theft were reimbursed. All new tokens were reissued via a new smart contract, discarding the previous contract address and tokens. This affected the stolen tokens by making them worthless and with zero impact on the secondary market. 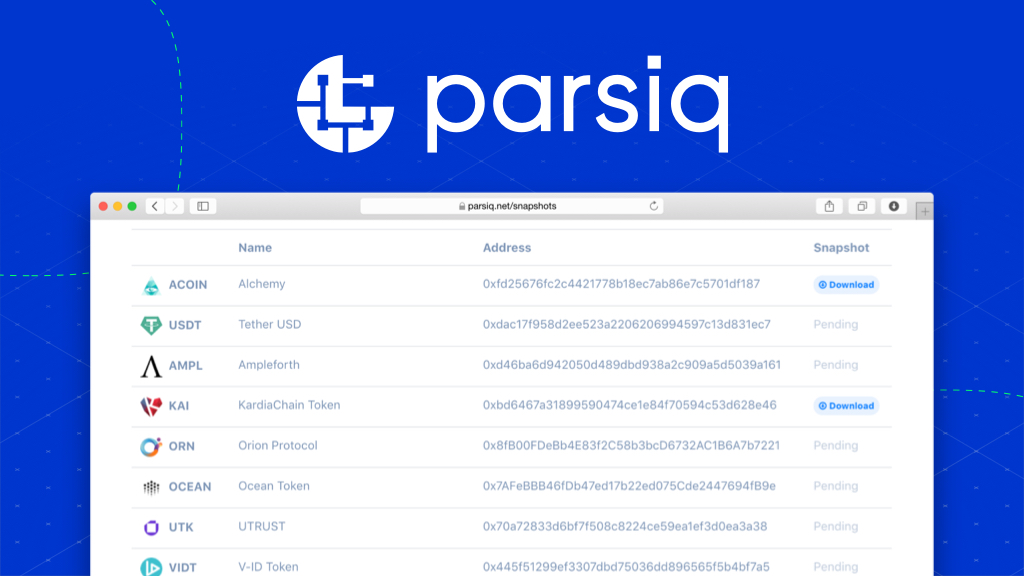 Currently, PARSIQ made snapshots of over 150 projects, including Ampleforth (AMPL), Compound (COMP), Dai Stablecoin (DAI), Maker (MKR), Tether (USDT), ZRX, and Yearn.Finance (YFI). However, one of the biggest challenges for the PARSIQ team was notifying Uniswap liquidity providers that they have to remove the hacked tokens from liquidity pools. Data shows that most of the affected tokens were removed from liquidity pools by users.

With PARSIQ 's technology, projects can have the option to “purge” the stolen coins through the use of a hard fork. In the recent KuCoin security breach, the collaboration between exchanges, projects, and blockchain security and automation platforms was critical to mitigate the consequences of the hacking incident as quickly as possible.

PARSIQ, however, is much more than a blockchain snapshot provider. The project empowers individuals and companies to automate workflows by connecting blockchains to off-chain apps, devices, and web services. The company utilizes real-time automations through connections of blockchain activity to off-chain apps and devices. Custom event triggers can also be built, increasing efficiency, transparency, and reducing the costs.

Among the core components of PARSIQ is the Block Adapter, which consists of several blockchain clients, coupled with PARSIQ’s track and trace modules. The purpose of the Block Adapter is to re-aggregate raw transaction data into a tool, called Native Events, which can be processed further to the rest of the system.

Those Native Events are processed by PARSIQ’s monitoring and notification sub-system. When a Native Event gets processed, it activates a series of pre-set Smart-Triggers, executes the actions in the triggers, and pushes out notifications via various delivery channels, like webhooks or Telegram for example. PARSIQ also has the functionality to collect, aggregate, and post-process various data, which can be later used in visualizations and reports.

Meanwhile, the company received a lot of major recognition in the crypto world. In July, PARSIQ was selected to enter in the CoinList Seed program. CoinList Seed, backed by Twitter CEO Jack Dorsey, managed to secure over $800 million from 10,000+ investors worldwide for new and aspiring crypto startups. Some of the other projects selected for investor`s interest in the program are Algorand, Celo, and FileCoin.