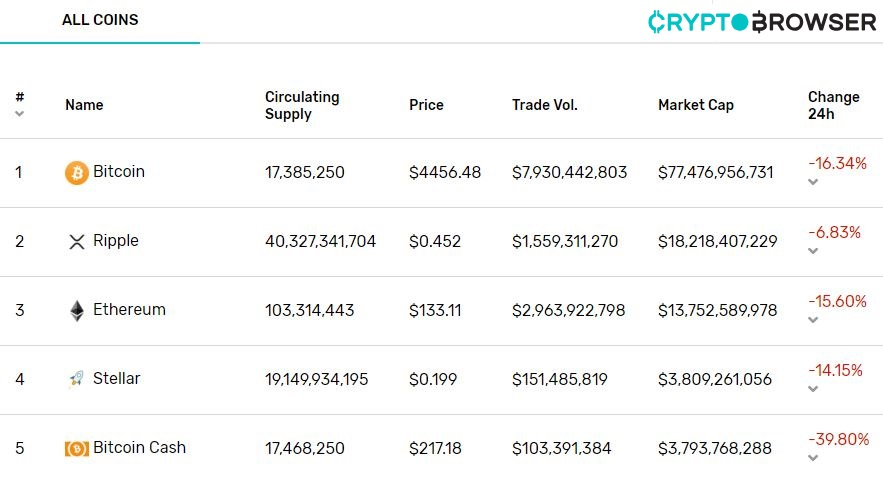 On Monday, XRP enthusiasts feared the worst, with Bitcoin falling under $5000, far from a bullish trend. Despite being the first time for BTC to trade at such a price in 2018, XRP somehow held its trend against all troubling signs such as overbought technical indicators and fears of centralization.

At the moment, XRP is trading at $0.452, 6.83% down in the last 24 hours. Litecoin and Ethereum are among the coins suffering from noticeable losses, losing respectively 14% and 15% of their value. Bitcoin went down by over 15% on the last day. The result of the movement supersedes that of the jaw-dropping bull run of 2017.

Talks of “Flipping” Erupts, Though Not Everyone Believes It

After Ripple’s flagship asset surpassed Ethereum’s market capitalization, XRP's adamant supporters exclaimed that BTC should lock its doors as it were. Some even believe that XRP would be the fall of Bitcoin from its long-standing status.

CNBC reporter Ran Neuner tripled his pro-Ripple comments, but a skeptical group of 92,000 followers claims that Ripple will be in the top spot by Friday if it continues with this trend. That references the widely spread “flipping” talk.

The Ethereum community is watching the situation closely, as some fear the Ethereum’s second-place reign has come to an end, as XRP is currently trading only a few cents away from its weekly high.

Taking to Twitter, eToro’s crypto savant Mati Greenspan started a discussion about XRP’s growing dominance. Mati touched on the asset’s social factor, which is currently one of the strongest in the market.

However, are taking the “flipping” discussion and the current crypto situation as a joke, with various comments and entertaining posts from crypto investors and analysts on social media, relating to the big black Friday crypto sell-off.

The volatility of the crypto market has proved that this can only stay speculation and the community is yet to see to what extent and form the market will be able to recover.