Two Weeks Into War: How The Russia-Ukraine Conflict Is Re-Shaping Cryptos

The Conflict May Turn Out To Be Pivotal For The Future Of Digital Assets Worldwide, According To A Report

The past two weeks saw a global market turmoil due to the ongoing war conflict between Russia and Ukraine. The “special military operation”, as it was called by Russian President Vladimir Putin, and the Western sanctions that followed immediately brought attention to the crypto sector as a way to bypass those sanctions.

However, as CryptoBrowser reported, the entire cryptocurrency sector and all of its sub-sectors are still dwarf-sized in the face of the Russian economy and the impact it has on European Union countries like Germany, for example.

It turns out, according to a report from DappRadar, Russia is the third-largest oil producer worldwide and holds around 5% of the world’s reserves, while Ukraine is a global leader in wheat production. Also, half of Russia's exported oil is consumed by European countries, fueling one-third of Europe’s oil consumption.

And while oil is not the only energy source Russia exports, it is a prime example of how European countries are dependent on fresh deliveries of crude oil. Looking at natural gas – the picture is shocking. Russia is undoubtedly the largest producer of natural gas and controls 25% of the world’s gas reserves. The sanctions that the U.S. and the EU imposed on Russia, however, snowballed into crude oil price increases, dragging gasoline, coal, diesel, and natural gas along with it.

Russia is also among the top fertilizer exporters, but the country is also rich Russia is also the largest producer of natural gas and controls 25% of the world’s gas reserves.

How the sanctions would impact Russia?

Thanks to the development of modern economies, more and more funds are being held overseas in currencies such as the U.S. dollar, the euro, British sterling, and gold. For Russia, the sanctions mean that its central bank would no longer have access to 65% of its $650 billion in reserves, leaving the largest country in the world with only $230 billion. This means printing fresh Rubles would become an issue, especially when almost half of Russia’s overseas funds are denominated in Euro and U.S. dollars.

Another key element of the sanctions was that at least seven of the Russian most critical financial institutions were expelled from SWIFT, the cross-border payments system. The SWIFT exclusion, as well as payment giants like Visa, Mastercard, American Express, and PayPal ceasing operations in the sanctioned country, leaves Russians with no foreign exchange route. The sanctions quickly tumbled the ruble down, this time – way harder than 2014, when Russia took a similar war conflict in the Crimea peninsula.

The war conflict, however, managed to create a positive sentiment into helping the Ukrainian government overcome the consequences of Putin’s invasion. Blockchain technology brought together celebrities, entrepreneurs, and people from different backgrounds to create DAOs to support the Ukrainian people and their embattled government.

In turn, the Ukrainian government created several state-operated crypto wallets, where users can donate Bitcoin, Ethereum, and ERC-20 tokens, as well as Polkadot and Tron. However, despite Ukraine not being the first nation to adopt a crypto wallet, since Venezuela and El Salvador already operate with Bitcoin, the world of cryptocurrencies saw the first-ever national wallets for humanitarian aid purposes.

DappRadar estimates that nearly $60 million worth of cryptos were sent towards Ukraine to provide support for the people of Ukraine.

The demand for crypto increases

The war conflict also created a surge in demand for cryptos, especially for Bitcoin. It turns out the amount of Bitcoin purchased in Hryvnias and Rubles is at a nine-month high, with Russians tripling their demand, while Ukrainian doubled it. 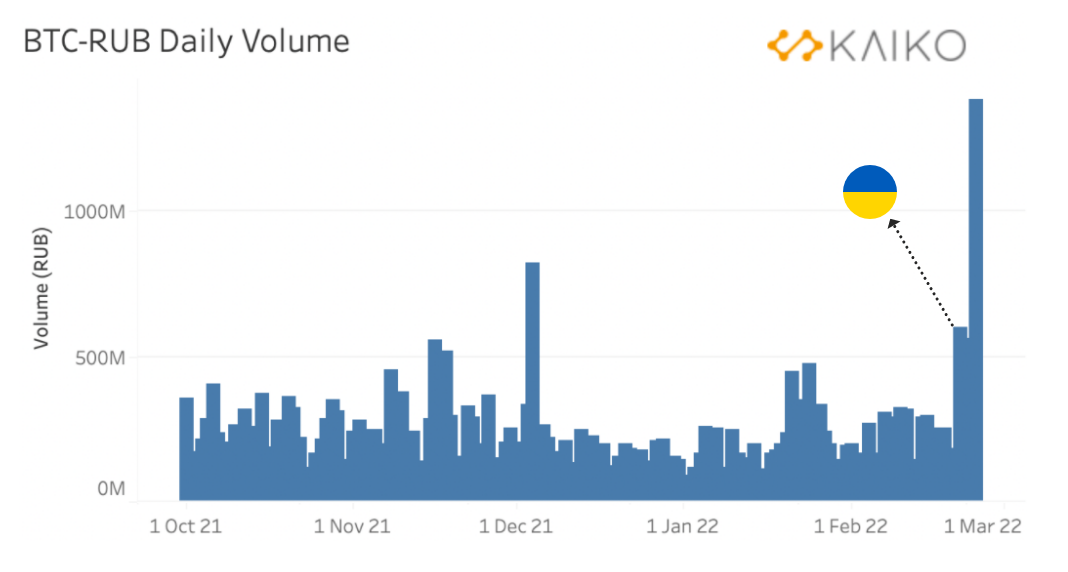 The increased demand gave a welcomed push to the crypto sector, which was at the time in bearish momentum. However, market experts predict turbulent times for cryptos, which already experienced a rollercoaster price ride in the past seven days. The turbulence, combined with the worldwide inflation, may prove to be a pivot point for the future of modern finance, digital assets included since COVID, inflation and the war crisis are disrupting economies and their effects would be observed for years to come.