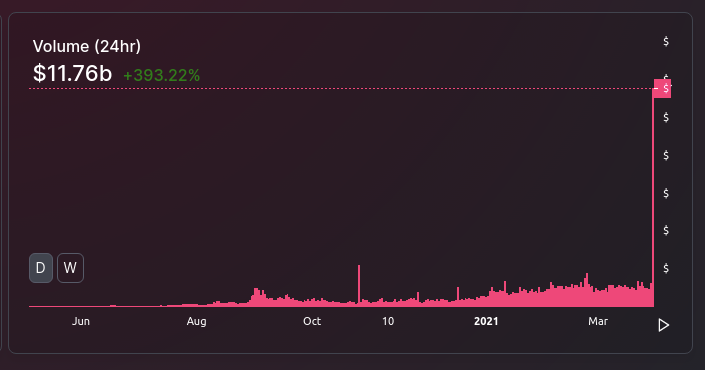 The massive uproar in trading volumes on Uniswap, however, was short-lived, as Uniswap creator Hayden Adams noted that the transaction volume data that DELTA has accumulated wouldn’t be included in Uniswap’s global volume due to defects in DELTA’s protocol. After the adjustment, Uniswap’s trading volume normalized to around $1.05 billion.

The last time Uniswap saw such a massive trading volume surge was in late October 2020, when Harvest.Finance was hacked, utilizing flash loans on Uniswap. However, the flash loans increased the volumes on Uniswap only to around. $2.22 billion on that day.

The defect is in DELTA’s liquidity rebasing system, which makes token minting more expensive over time. However, the algorithm seems to be conducting numerous trades on Uniswap, effectively pushing a given asset’s price higher, which is similar to wash trading, according to Uniswap’s creator Hayden Adams.

Uniswap’s decision to discard DELTA from the global DEX volume on Uniswap, caused 0xRevert, a self-identified developer at the project behind DELTA to exploit Uniswap’s data system.

“Everyone can now create $20b volume on a custom token,” 0xRevert noted, adding that the “attack will continue until DELTA trading history is reinstated, and we get an apology from Uniswap for abusing centralized power.”

If 0xRevert pushes the smart contract public, it would undermine Uniswap’s statistic info and render it useless. If such a scenario occurs, the community may lose its trust in the platform, and trust and transparency are key features of decentralized finance.

Hayden Adams responded to the accusations, stating that such threats are “one of the dumbest things I’ve ever seen”, adding that Uniswap.info is an analytics interface and not a decentralized protocol and it's always filtering out fake volumes.