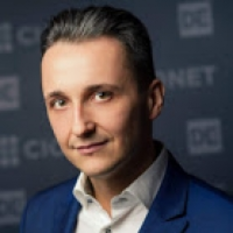 Patryk Rzadzinski is currently the CTO at LendSend, an innovative blockchain lending and remittance platform. Previously he held the position of Director, IT Operations at MoneyGram International for 4 years. MoneyGram is a global vendor of payment services with 3000 employees and over 350,000 partners. It is a demanding transaction environment with major financial institutions and banks as customers. Patryk was responsible for multiple global technology functions and transformations including building a blockchain-based remittance proof of concept. Previously, Patryk held the position of the Group Head of IT for OSTC from October 2009 until April of 2014 based out of London in the United Kingdom. OSTC is a global electronic trading company, using a wide spectrum of trading/charting software.As the Head of It he was responsible for leading the IT Department, budget management, financial regulations on system and document level, solving critical cases where trading functionality is impaired by a technical difficulty, negotiating and pursuing MSAs, SLAs and contracts with external providers, among many more responsibilities as the head of the department. From January 2009 until October 2009, Mr. Rzadzinski was the Head of IT for the Polish market of OSTC, being responsible for the entire IT Department and their day to day operations, technical planning of solutions, strategic leadership, remote management of IT Specialists, planning IT project operations in all offices. Prior to that, he was the IT manager for OSTC from September 2007 until December 2008.