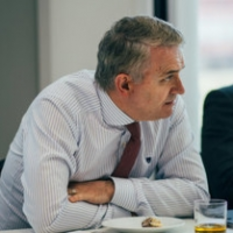 Highly experienced business leader, adviser and investor. Founder of Blueray Capital which has invested in over 50 technology businesses and ICOs and provides strategic funding and commercial finance to enable growth, development and value creation. Bought and sold multiple businesses and raised multi-£ms from private investors, syndicates and funds Blockchain and crypto investments include: Bankera: A digital bank for the blockchain era offering payments, loans, deposits and investments. Over 80,000 people invested €150m in BNKs, the ERC20 compliant tokens for Ethereum blockchain. Launched and trading on the SpectroCoin exchange it is one of largest ICOs in 2018. CommerceBlock: A smart contract ecosystem on public blockchains for global trade. Developers and end users will be able to manage all stages of a business interaction and fulfil their contractual obligations by utilising the CommerceBlock platform, paying for use via its token, CBT which trade on OKEx, Idex and EtherDelta. Crypto20: The first tokenised Crypto hybrid index fund diversified across the top 20 cryptocurrency assets and re-balanced on a weekly basis. $35m was raised from 13,004 investors. C20 tokens trade on Idex, EtherDelta, HitBTC, CoinExchange.io & YoBit.net. Envion: Smart, modular, crypto-mining infrastructure hosted in mobile mining unit containers and placed directly at sources of low cost solar energy. Weekly Ethereum payments are paid to EVN token holders. 30,000 people invested $100m, making it a top ICO in 2018. EVN tokens are traded on HitBTC, Token.Store & IDEX Simple Token: Blockchain is currently too complex for most consumer apps, too daunting for consumer-facing developers, and not currently scalable to millions of end-user micro-transactions without public-private chain innovations. Simple Token, OST, is an ERC20 token, a protocol, and a robust software stack to create, launch, and manage your branded token economy. The OpenST protocol enables companies to stake Simple Tokens against their own Branded Tokens, minted on open scalable side blockchains, in a cryptographically auditable manner. 7,000 people from 130 countries invested 47,000 ETH in OST which is traded on Binance, OKEx & Huobi