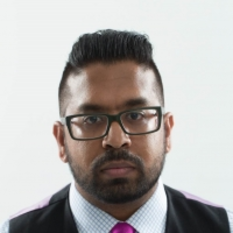 Born in Bombay but raised in Chicago, Amar is a veteran of both the entertainment and digital advertising industries. Educated with a B.A. in political science from Colgate University, Amar started his career in Hollywood where he went on to work in various parts of the industry, from home entertainment distribution to film finance and production, and ending up in digital cinema. Along the way he produced two feature films and is developing two series pilots. Amar made the switch to digital advertising where he’s quickly risen through the ranks on both the agency and publisher side at top tier firms such as Publicis and Hulu, managing multiple Fortune 100 accounts in different verticals, including CPG, retail, automotive, and consumer electronics. He developed the idea for JetSet while with his wife on their honeymoon where she was hoping someone would come up with a system to help people exchange money easier without the burdensome high fees and commissions of the current systems in place. The power of the internet and of Reddit introduced Amar to Tiaan and Marco, and together they’re striving to make travel more seamless and integrated.