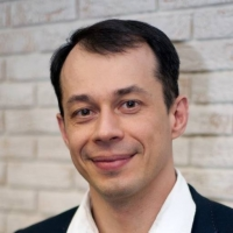 Businessman, co-founder of a number of projects: DiscountMobile, Dinect, MUVIS. – 2004 - graduated from the post-graduate course of the SB RAS, specializing in "Mathematical modeling, numerical methods and program complexes". – From 2006 to 2009 - supervised the technical departments of several engineering companies. – 2009 - co-founded of DiscountMobile. – Since 2014 - the head of the company Dinect. – Since 2017 - the head of the Joys Digital.