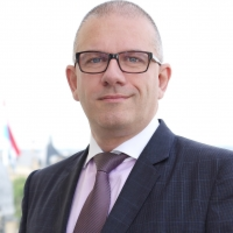 Chris, 47, is a natural-born leader in new technologies and finance since 20 years with a strong business acumen, a persistent bias towards excellence and a long experience either as an Entrepreneur or Executive in small to large companies in International, cross-cultural and highly competitive environment. Chris, as a Founding Partner of ACCM and independent consultant, designed Compliance & AML systems for medium-sized structures and startups specialized in Fintech and Blockchain Technologies since 2013. Chris has been the former Managing Director of Flashiz and the Chief Compliance Officer of SnapSwap, both regulated Electronic Money Institutions in European Union. In 2017, Chris has been named as Independent Director of Alantor Blockchain Investments. in 2018, Chris has been named as Independent Director of Olymp Capital. Alantor Blockchain Investments and Olymp Capital are both Crypto Funds based in Luxembourg. Chris recently joined KYC3, as a Deputy Director, a KYC & AML services providers for financial institutions and crypto-companies. Chris is the founder and Chairman of the Virtual Currencies Working Group in Luxembourg, hosted since 2015 by APSI, where he promotes the education about distributed ledger technologies and new business models in Finance, Fund Industry, Payments and Regtech. He is also a founding member of Infrachain and Luxembourg Blockchain Association, Board Member of APSI, member of ALCO, member of the ALFI Fintech Working Group and President of the Sacred Heart University Alumni Association. Advisor and Investor: BITIT.IO - WOORTON - TREZORIO - PEER MOUNTAIN