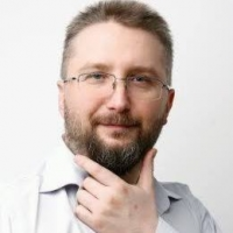 Gladly help others! I like to do business with decent and cheerful people.

DMITRIY PAVLOV Born on October 30, 1975. Education: 1996 – graduated from the Faculty of Applied Mathematics of the National Technical University of Ukraine Kyiv Politechnic Institute (currently – National Technical University of Ukraine Igor Sikorsky Kyiv Politechnic Institute) majoring in Computer Systems Software. Dmitriy has been a permanent member of the New York Academy of Sciences and IEEE since 2009. He is working on the thesis paper. Aspen Institute Kiev since 2012. Published papers: 2010 – the book “How to properly order and improve the website” 2010 – the monograph “Behavioural patterns of the click fraud hackers” 2009-2014 – publications in various scientific journals 2012 – a utility model patent. Network fraud against the online advertising company detection method. 2014 – the book “Effective website creation. A whole bunch of advice” 2017 – the book “Building a digital agency. The technology of success” Business success story: 1991-2018 – Founder and CEO of UCT WORLD CORPORATION. Philanthropy and personal achievements: Holder of the 5 church orders (The Order of the Saint Vladimir of the 3rd, 2nd, and 1st level, the order of the Saint George, and the Order of St. Nickolas). 2017 – Chairman of the Board of Trustees of the Institute of Pediatrics, Obstetrics, and Gynecology (POG). Dmitriy has seven children. Additional information: UCT WORLD CORP is one of the leaders of the online advertising market of Ukraine. It was the first one in Ukraine to receive the status of the company certified by Google, Inc. in 2008. In 2009 the company became the market leader in the number of customers and in the volume of advertising sales in Google among the advertising agencies. In 2010 the company proved the status and became the certified Google Inc. partner once again. Business success story: 1991-Until now – Founder and CEO of UCT WORLD CORPORATION. 1997 beginning of the algorithms development for detecting information attacks 2001 creation of a mathematical model of a neural network. 2004 description of behavioral models of consumers of promotional products. 2008 Start the development of a neural network prototype optimizing the promotion in Google Adwords. 2008 became the first Google Adwords Qualified Company in Eastern Europe and the CIS. In 2011 the company was the first on the online advertising market to be certified to ISO-9001:2008. In 2013 the company was the one and only agency in Ukraine to possess a very high status of Google Analytics Partner. In 2014 the company received the status of Yandex certified partner. In 2015 a UCT WORLD CORP branch office in Kazakhstan was established. In 2016 the company won Google ReadytoRock contest. In 2016 reorganisation of the company by values was conducted. In 2016 a branch office in the UAE was established. In 2017 a branch office in Belarus was established. In 2017 the company received the status of the Premier Google Partner. In 2018 UCT WORLD CORP has been chosen for the Google unique program - "Tomorrow Agency". At present, the company is actively developing, utilizing the innovative technologies of staff management and training, marketing, and advertisement. Domain-specific scientific research is conducted, and unique tools are being implemented. Interests: Church and children charity, children development, business training, theatre, science, and investment. Quote: We invest in unique possibilities!