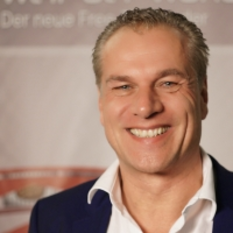 In 2018, visionary Hendrik Hey is focusing on the Initial Coin Offering (ICO) for a blockchain-driven licensing, trading and distribution platform for high quality video content for international broadcast, VOD and online video publishing. 2013 Hendrik Hey founded his own broadcast network with free-to-air TV stations in Germany and Switzerland. 1996 In March 1996 he developed, launched and presented the science and documentary series “Welt der Wunder” (World of Wonders) on ProSieben. This award winning show has bee successfully on-the-air for more than 17 years. Welt der Wunder is the most popular series of its kind in Germany and was distributed to several countries, e.g. France, Croatia and Russia. Beginnings Hendrik Hey started his journalistic Career in 1987 as a Freelance Producer in ARD Radio Networks. Specialized on nationwide news and politic reports he worked as well as a responsible producer for several radio shows in the ARD. Beside his work for news and magazine-formats and the production of a number of documentaries Hendrik Hey developed, financed and produced a 90 minutes TV Live Show which was successfully aired in 1990 on 3Sat.