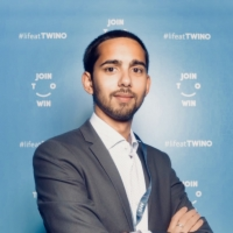 Specializing in software engineering, Joseph has previously worked for companies and startups in France on a freelance basis. In 2015, he co-founded the startup, Bonanza and assumed the position of Chief Technical Officer. Renowned for its matching algorithm, the service makes it possible to efficiently link companies with students looking for positions. The company soon won over the French public and is currently in a phase of international expansion. Joseph was subsequently hired as a manager in a research and innovation laboratory. Responsible for making prototypes for companies, his work has led him to explore the areas of Artificial Intelligence, conversational assistant technologies, and Big Data. His background has allowed him to work with companies such as IBM, discovering Watson’s services, and also to collaborate with Microsoft. Passionate about cryptocurrency, he dreamt of an assistant system capable of responding to user requests using natural language. In 2017, he decided to embark on the adventure of creating the company Daneel Assistant.