Two of Latin America’s most struggling economies – Venezuela and Colombia, found themselves being second and third in terms of the amount of Bitcoin traded on the peer-to-peer trading platform LocalBitcoins.

Venezuela, for example, managed to maintain its second spot in Bitcoin trading on LocalBitcoins, with 12.3% of all traded volume worldwide in 2020. However, Venezuela falls short of the leader in P2P Bitcoin trading – Russia, which leads with 17.4%.

Meanwhile, yet another Latin American country joins the top three P2P Bitcoin trading countries on LocalBitcoins. Colombia managed to secure 11,3% of the total amount of Bitcoin moved on LocalBitcoin, surpassing the United Kingdom and Nigeria, which are representing the top-5 chart. Colombia is also leading the pack in terms of Bitcoin ATMs deployed, as the country placed 60 ATM devices within its boundaries. The ATM deployment is a clear sign of increased domestic interest in Bitcoin, especially when Bitcoin price exploded in late 2020.

Combined, Venezuela and Colombia make 23% of the entire LocalBitcoins` market, outweighing the Sub-Saharan Africa region, which mostly uses LocalBitcoin’s direct rival Paxful. The reason behind the Latin American Bitcoin usage spike is both geopolitical and financial. Both Venezuela and Colombia are known for monetary hyperinflation, which may be why users are deciding to swap their fiat currencies for Bitcoin. 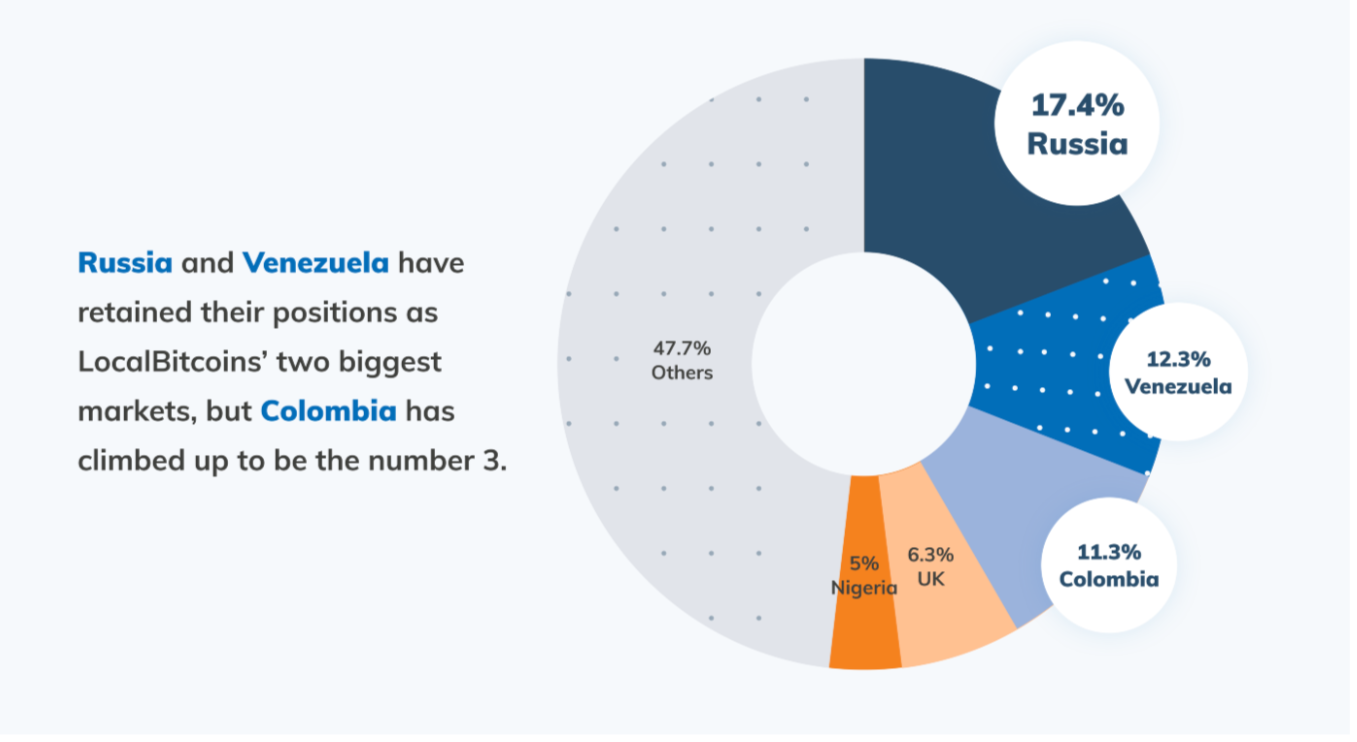 "Hyperinflation in the country has led the exchange volume of Bitcoin to rise considerably in the country. This also influences the volume in its neighboring country, Colombia,” a report from LocalBitcoins shows.

Albeit Venezuela and Colombia are making the greatest shift towards cryptocurrencies, other Latin American countries like Argentina, Chile, and Brazil are also considerable forces in the continent. The recent COVID-19 pandemic provided a catalyst for using cryptocurrencies as means for storing value.

Furthermore, Bloomberg’s 2020 Misery Index, which values countries against indicators like unemployment rate and inflation, ranked Venezuela as the “winner” of the rank for a sixth consecutive year. Bloomberg also estimated massive inflation of 4,043% on an annual basis for Venezuela. Argentina is second in the rank, while South Africa and Turkey are third and fourth, respectively. Colombia climbed three positions up as the fifth most miserable country in the world.

On the other side of the spectrum are countries like Thailand, Switzerland, Singapore, and Japan, which take the top four spots in the “least miserable” category.