A Vitalizing Spike For Bitcoin And Ethereum, Almost All Cryptos In The Green

Bitcoin’s 12% Price Spike Has Pushed Other Projects Up, With Ethereum Testing Its Three-Week High

After what it may seem like a price spiral of doom for the crypto sector, Bitcoin made a sudden recovery, erasing 12% from its losses in just 24 hours. Compared to a week before, the crypto industry leader is up by 23%.

The primary reason, according to crypto price analysts, is the short sellers' bailout, fearing a strong week coming ahead for the crypto sector.

The industry leader, Bitcoin, managed to reach the foothills of $40,000, reaching as high as $39,850. The figure, despite being far from its mid-April, recovered to levels not seen since mid-June 2021.

Most of the crypto enthusiasm came when cryptocurrency enthusiast and Tesla boss Elon Musk announced that the automotive manufacturer may resume Bitcoin payments, but only after the crypto conducts due diligence on its energy use. Tesla stopped accepting Bitcoin as a payment method in May due to environmental concerns, related to Bitcoin’s mining procedure.

Twitter boss Jack Dorsey noted last week that Bitcoin is a “big part” of the social media company’s future, joined Musk’s rather optimistic stance. Rumors also suggest that Amazon is looking to accept bitcoin payments by the end of 2021.

Crypto analysts agree that the much-needed support may shoot Bitcoin past the fierce bearish resistance and mitigate the consequences of the May plunge. On-chain metrics also show that the heavy short-seller liquidation may indicate that the struggle of keeping Bitcoin’s price low is now to an end.

“With a record $1.2 billion in shorts liquidated over the past 24 hours, the outlook and momentum for the week ahead are positive”, Rabaglia added.

The rest of the crypto sector acted accordingly to Bitcoin’s price increase. Ethereum (ETH), for example, managed to hit a three-week peak of $2,344, skyrocketing its trading volumes with a 52.86% daily increase. 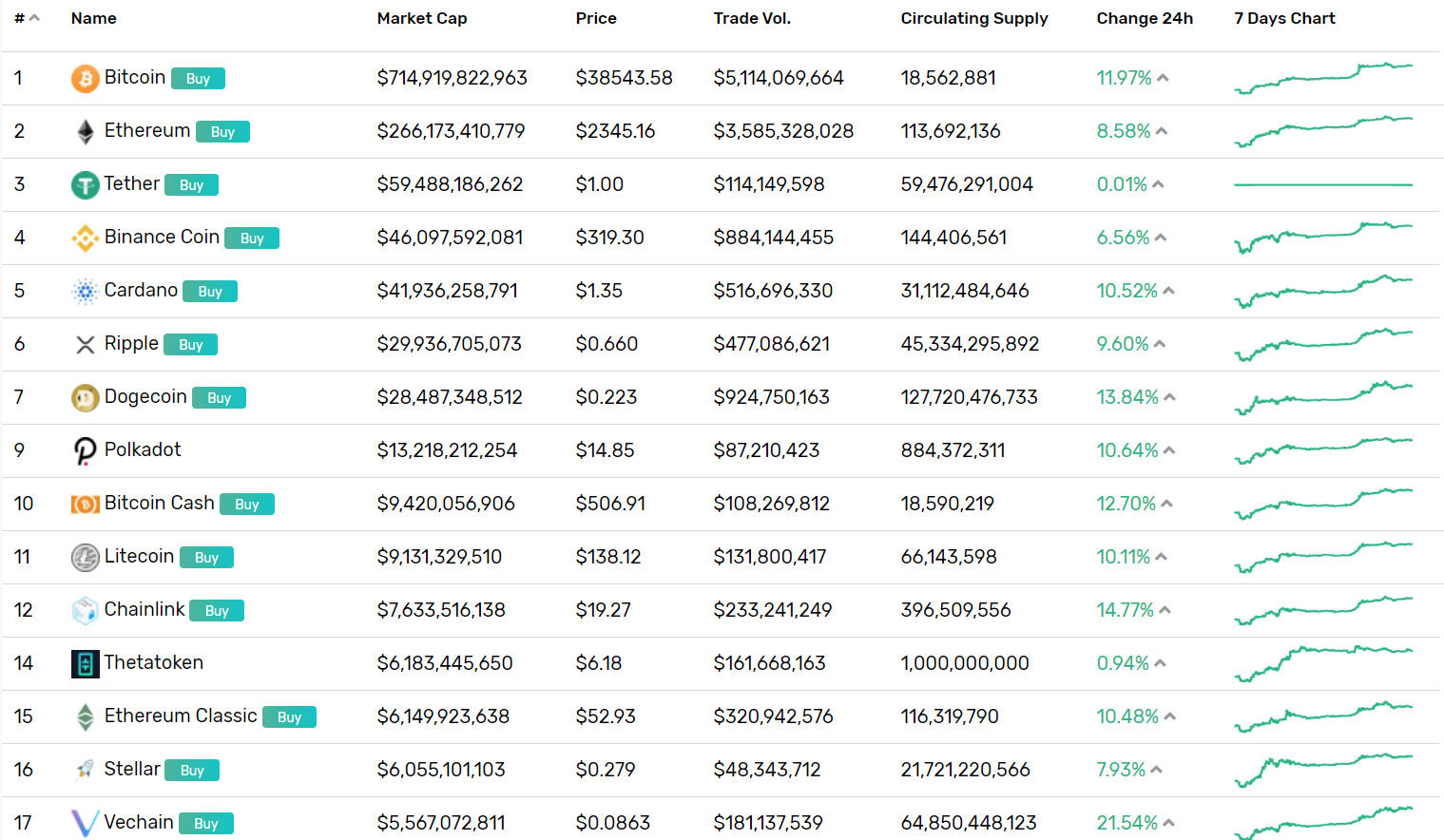 Nearly all of the rest in the top-100 crypto ranking by Cryptobrowser.io are in the green, recording anywhere from 2% to over 21% for assets such as VeChain.

Meanwhile, the market capitalization of the entire crypto sector went up rapidly, reaching a current level of $1.54 trillion, which happened for the last time in mind-June. However, the crypto market is still far from its all-time high of over $2.5 trillion, reached on May 12, 2021.