According To A Stock-To-Flow Analyst, Bitcoin’s Price “Has To Go Up, Unless S&P500 Crashes”

Correlation between digital assets and economic movements in the traditional stock market has been a subject of numerous debates over the past couple of years, and the records show that there have been cases confirming an existing relationship in the past.

Similar to the previous cases, in a series of Tweets on 17th June, PlanB, who is responsible for the stock-to-flow (S2F) and stock-to-flow cross assets (S2FX) identified correlation between the stock market and Bitcoin. PlanB believes that the cointegration and correlation between the digital asset and the S&P 500 is valued at around 95%, due to the trading pair`s “R squared” indicator.

The large percentage of correlation explains that if Bitcoin is seen as a dependent variable, its price movements will be influenced to a great extend by movements on the stock market.

PlanB, not only believes that either the Bitcoin will reach $18,000 or the S&P will crash, but also stays behind the model that predicts a price of $288,000 per Bitcoin. Their current prediction of the two-way scenario for Bitcoin and S&P comes after events in March, during which BTC was “in line” with stocks.

PlanB posted on Twitter, explaining that their findings coincide with the S2FX price prediction model and there are implications of BTC reaching $288k when S&P reaches $4,300. 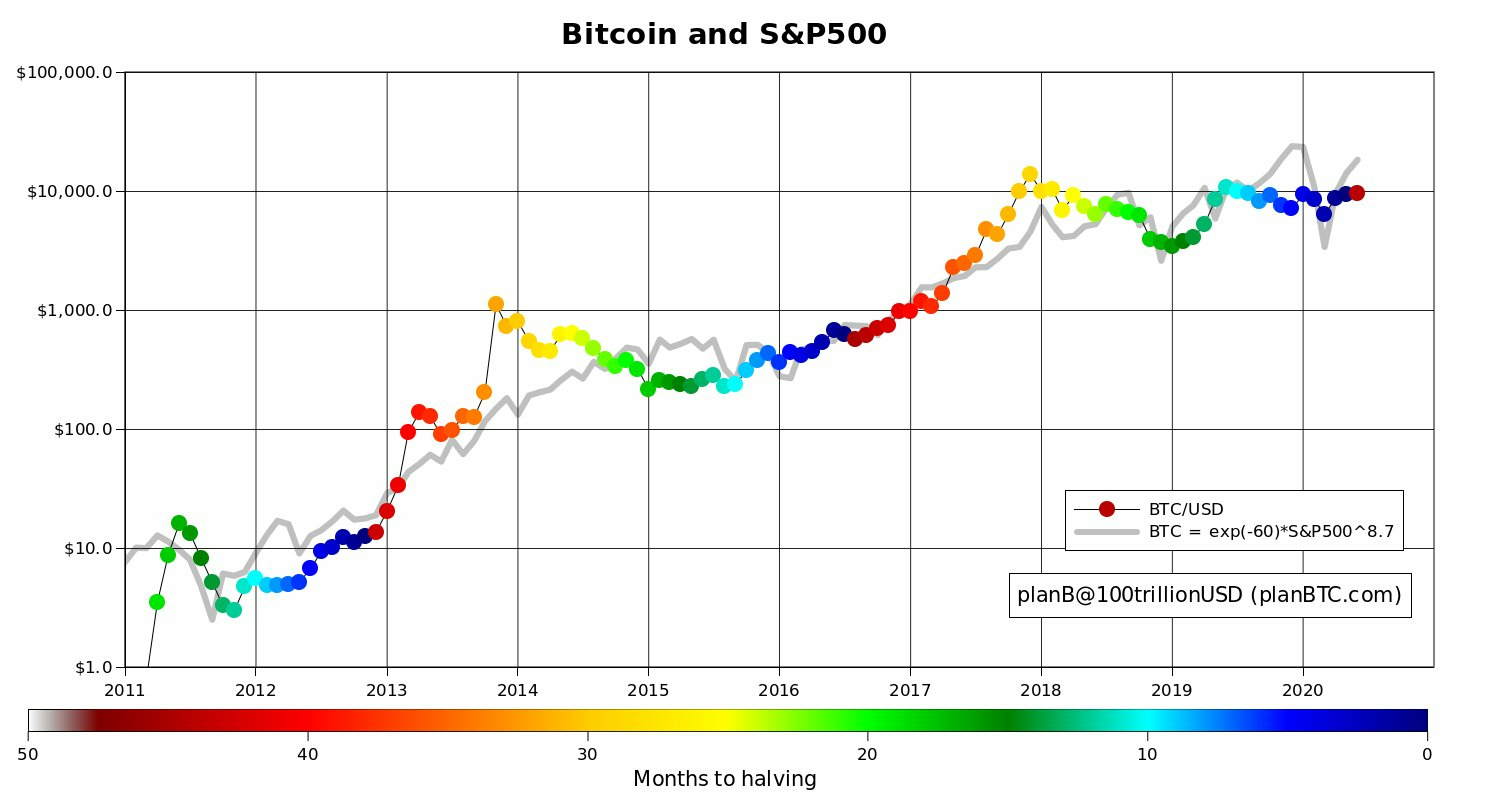 The S2FX method of prediction uses the amount of new BTC in circulation against the total existing Bitcoin supply to value its performance. PlanB’s thesis implies that by 2024 when the fourth Bitcoin halving takes place, the anticipated $288,000 price levels for one BTC should occur.

The analyst also noted that the correlation between Bitcoin and the stock market is not a new event. Such correlation is just a “timely reminder” amid Bitcoin prices moving in conjunction once again.

As Cryptobrowser.io reported earlier this week, Bitcoin’s price slumped below $9,000 amid a red opening for S&P500 on the stock market, and a correlation between the two was once again observed.

However, PlanB noted that the COVID-19 virus outbreak and the measures, taken to revive economies worldwide, are very likely to lead to fiat money inflation, which in turn would boost both BTC and S&P500 prices. Meanwhile, central banks are on a buying spree for worthless shares, which causes severe interventions in the stock markets.

The monetary policies and central bank moves would lead to a hefty correction. According to some experts, it’s only a matter of weeks for a correction to happen. The correction, given Bitcoin’s price correlation, would extend the process of “price decoupling” for the leading cryptocurrency.

Furthermore, PlanB considers Bitcoin to be a super-leveraged S&P500 position.

“As I stated back in September 2019, we needed a big stress test for Bitcoin and the COVID-19 situation provided it, proving that Bitcoin is tightly correlated with S&P500. As a matter of fact, Bitcoin acts as a 416x-leveraged position of S&P, with a -99% stop-loss”, PlanB concluded.