Users Who Wish To Stake Their Cardano (ADA) Could Possibly Get 4,65% Return Per Year

Cardano, which is the seventh-largest cryptocurrency at the time of writing, announced that at 21:45 UTC on July 29 its Shelley mainnet went live. Technically, Cardano underwent a hard fork, which enabled users to stake ADA tokens to earn 4,65% in interest.

According to Cardano’s Global PR and communications Director Bakyt Azimkanov, the update would grant ADA’s blockchain “full network decentralization, the launch of stake pools, and the beginning of delegation.”

ADA holders have two new options in front of them – to register themselves as staking pool operators, which requires great uptime and technical management, or to delegate their existing ADA tokens to an already established staking pool. According to Azimkanov, when Cardano reaches over 1,000 operating staking pools, “Cardano will become one of the most decentralized, scalable, and secure blockchains to date.”

Cardano’s delegation algorithm divides the process from staking tokens to reward delivery into cycles, called Epochs. Users who stake tokens on an epoch will receive their calculated rewards after two cycles. For example, if users stake their ADA tokens between July 29 and August 3, they would receive interest on August 18 (see image below). 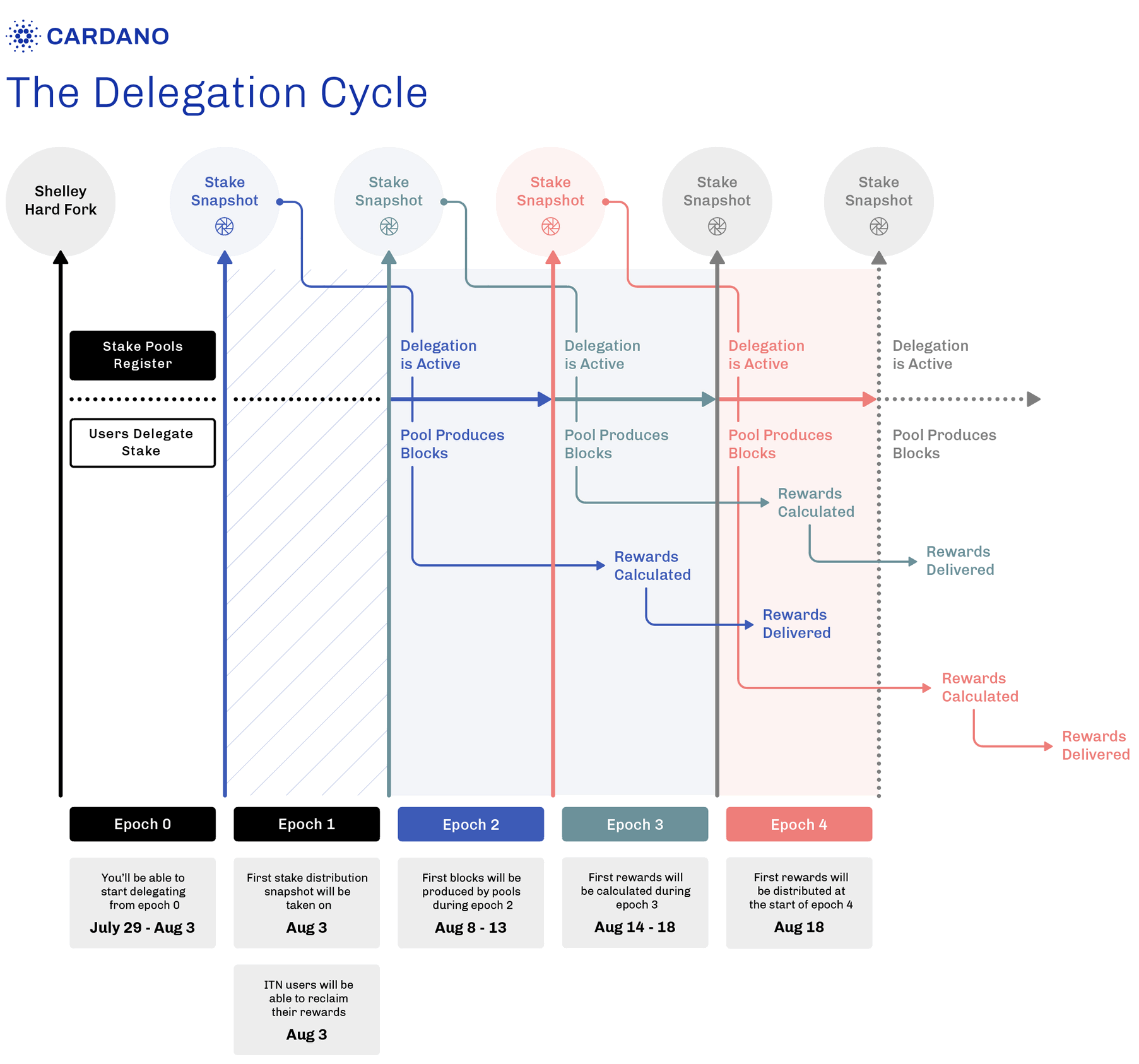 However, Cardano had a long way to go until it reached the staking phase. Development of Shelley started in 2018, with a prototype network being deployed in December 2019. Cardano invited several early bird participants, which generated hype around the new network, with as much as 14,000 new addresses per day.

Cardano’s roadmap includes other two vital milestones that must be reached, dubbed “Voltaire” and “Goguen”. Reaching “Voltaire”, Cardano’s network would see the implementation of a governance system, which will help the development guidance, while “Goguen” will add functionalities such as smart contracts, dApp development, and custom token issuance.

Charles Hopkins, IOHK’s CEO, stated his confidence in the Cardano ecosystem on Twitter:

“This time next year I predict there will be hundreds of assets running on Cardano, thousands of DApps, tons of interesting projects, and lots of unique use and utility. 2021 is going to be so much fun watching Cardano grow and evolve. The community is definitely ready to innovate” - Hopkins tweeted.

Cardano’s transition to enabling dApps will put it in direct competition with Ethereum, which has over 3000 dApps, 200,000+ custom tokens, and will have a Proof-of-Stake migration with the release of ETH 2.0.