Since Its All-Time High In September, The Sector Lost 10% Of Its Total Value Locked (TVL)

The decentralized finance (DeFi) sector is having a hard time staying afloat, despite Bitcoin holding on to a relatively sideways start throughout October. However, many analysts believe that the DeFi bubble has now burst.

According to data from DeFi pulse, the total value locked between all DeFi platforms decreased by ten percent, which indicates a massive cooldown from the summer DeFi craze. Interestingly, for the first time in several months, the DeFi ecosystem remained calm, without security breaches, token pumps, and food farming. Also, some of the most hyped projects in the DeFi realm dropped over 90 percent from their all-time high.

Crypto expert Alex Saunders published a chart on Twitter, showing that most of the DeFi projects are currently between 51% and 96% price decrease since hitting an all-time high. Also, Saunders showed the deviation for the past two months, emphasizing that projects like yearn.finance, dfi.money, and xDAI stake recorded six to nine times price increases in August but dropped between 16% and 38% in September (see the image below). In contrast, only Uniswap recorded an upwards price swing, with 26% in the green. One of the biggest losers is Curve Dao Token, with a price drop of 96% after reaching an all-time high. 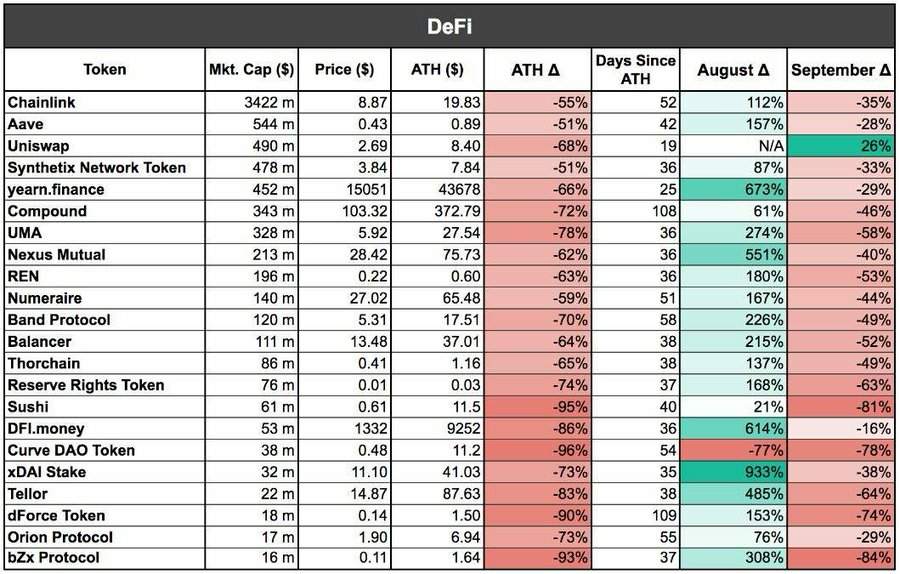 "In case I haven't been clear. TAKE PROFITS. I most certainly have been. #DeFi is a bubble. There are now multiple protocols that have crossed the chasm from yield farming to Ponzi economics", Sauber tweeted back on September 2, 2020.

Meanwhile, Sam Bankman-Fried – the man who “saved” SushiSwap questioned the volumes of decentralized exchanges. Speaking at the LA Blockchain summit, Fried noted that the volumes will fall as soon as incentives like liquidity mining fade away.

Many crypto experts consider DeFi to be driven by short-term speculators and liquidity farmers, rather than long-term investors and HODLers, which drives the DeFi bubble scenario. However, 2020 proved that DeFi has a huge demand, which goes beyond farming and speculations. Decentralized financing is also a serious competitor to traditional financial systems, which are collapsing.

However, the idea of users becoming their own bank is a concept that allured many investors. DeFi proved to be just the first step towards decentralization. ETH 2.0, for example, would aim for revolutionizing the crypto industry, gaining an increase of interest in a short period.

Also, the DeFi boom would spark a series of new regulations. They would sift projects and eliminate some of DeFi’s negative aspects, such as automated arbitrage bots, smart contracts vulnerabilities, as well as protocol clones.