Grayscale Investments Bitcoin Cash Trust marked a sharp, $1.6 million decrease in assets under management (AUM), according to a recent report from CoinTelegraph. The BCH hard fork was announced in August, but the AUM drop became more severe as a result of its actual implementation, which took place this month.

Diving deeper into the hard fork, data from CoinDance shows two separate chains – the community-driven Bitcoin Cash Node (BCHN), and the Bitcoin ABC (BCHA) chains. However, miners almost exclusively preferred mining blocks on the community-driven chain, rather than BCHA. Looking at hash rate data, Coindance confirmed that around 80 of the initial blocks right after the hard fork was mined in BCHN’s favor. Despite the drop in network activity, Bitcoin Cash’s hash rate rebounded, with a value close to 2 EH/s. 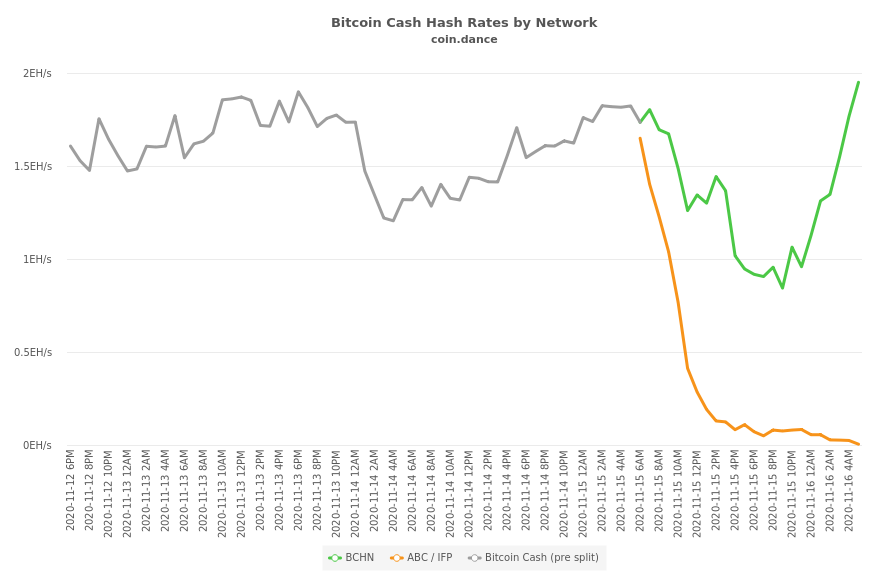 BCH trading volumes increased after hard fork completion, meaning that users are selling their BCH at crypto exchanges instead of storing it. This may be the cause of the reduction in assets under management that Grayscale manages.

Тhe hard fork came as an answer to Bitcoin ABC’s decision to incorporate the so-called “Coinbase rule”, which would allocate 8% of block rewards to a development fund controlled by BCHA lead developer, Amaury Sechet. The community responded that the “Coinbase” tax is not necessary, claiming that miners can fund the blockchain without additional taxes.

BCHN’s victory over BCHA, however, is not a surprise, as both small-scale miners and crypto exchanges showed their support for the BCHN chain. Coinbase, for example, stated that “Coinbase will run BCHN nodes and expects that it will be the dominant chain post-fork. […] Once the fork is complete, please be aware that we will NOT support BCH ABC forked coin”.

In addition to that, Binance also had their take on this, noting that “Binance will credit users with BCH from the chain with the most work done.”