Impermanent Losses Are The Main Cause Of The Money Loss, According To A Recent Study

Almost half of the liquidity providers on Uniswap’s v3 are seeing negative price results, which is a major issue for them.

According to a study by Topaz Blue and the Bancor Protocol, 49.5% of liquidity providers (LP) on Uniswap v3 have incurred negative returns from impermanent loss (IL).

Interestingly the IL losses come amid Uniswap v3 generating the highest fees of any automated market maker (AMM). This means liquidity providers may be better off just holding their assets, rather than staking them for liquidity fee returns.

“The average liquidity provider (LP) in the Uniswap V3 ecosystem has been financially harmed by their choice of activities and would have been more profitable simply holding their assets.” the study notes.

Impermanent losses occur when the price of a given asset in the liquidity pool changes, and since liquidity providers pair two assets together to form a position, the proportion in the pair changes with the change in the asset’s price.

For example, if a liquidity provider staked equal values of Ethereum (ETH) and Tether (USDT), denominated in US dollars, and the price per ETH token skyrockets, arbitrageurs start to decrease the amount of ETH from the pool and sell it at a higher price. The removal causes a decrease in the USD value of the user’s position or an impermanent loss.

“The user who decides to not provide liquidity can expect to grow the value of their portfolio at a faster rate than one who is actively managing a liquidity position on Uniswap v3,” the report added.

The Topaz Blue and the Bancor Protocol report focused on 17 pools, which accounted for 43% of all of Uniswap v3’s liquidity. It turns out that the analyzed pools generated $199 million in fees from $108.5 billion in trading volume from May 5 to Sept. 20, 2021.

Furthermore, at the time of the analysis, the polls encountered $260 million in impermanent losses, resulting in $60 million in net total losses.

Out of the 17 analyzed pools, 80% recorded that IL outweighs the fees earned by liquidity providers. Just three of the 17 protocols show net positive gains - WBTC/USDC, AXS/WETH, and FTM/WETH. The MKR/ETH pair saw one of the biggest losses, with 74% of users reportedly making a loss. 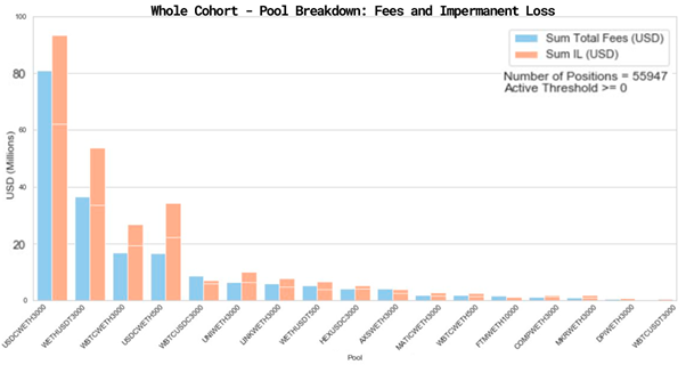 Meanwhile, the report also delved into the time frame of liquidity providers locking their funds, and it turns out active users are overcoming the impermanent losses better than passive traders. Nevertheless, both parties seem to have made a positive LP outcome when holding funds for a period longer than 30 days. Furthermore, almost all-time frames lower than a month still saw IL outpacing earnings.

Squid Game Token Up Over 1,000% After Binance Blacklisted Develop...

Bitcoin Records Its Best Month Of 2021 Amid A Three-Year Low In B...

Nigeria Leads Africa And Launches A CBDC, Despite Usage Uncertain...

Bitcoin Options Explode Amid Preparations For The First U.S. Bitc...

“The Big Three” Of Cryptos Is On The Rise

Cryptocurrencies In The United States Would Be Regulated

The U.S. Has No Plans To Ban Cryptos; Bitcoin’s Price And Dominan...

Memecoins In A Fierce Battle Amid ETH All-Time High

Brazilians Purchased Over $4 Billion In Crypto In 2021

How To Bulk Send MATIC Tokens

What Is The Peachfolio App?

BNB Airdrops And How You Can Send Them In Bulk