A substantial jump in demand from retail and institutional investors managed to put Bitcoin in an excellent position to shoot past $52,000 for the first time in 4 months. However, institutional demand struggled during the first three weeks of August, so the world’s largest crypto fell in a rollercoaster price ride with a monthly low of $42,848.69.

“Ethereum saw the third week of inflows totaling US$14.4m, while market share is at a record 28%, highlighting that while some investors have protocol concerns, its dominance is continuing to rise. Other altcoins, such as Cardano, Polkadot, and XRP all saw notable inflows of US$6.5m, US$2.7m, and US$1.2m respectively,” CoinShares added.

The buying pressure pushed Bitcoin’s Fear & Greed Index into “Extreme Greed” territory. The index measures market sentiment and the “extreme greed” value often means that more and more investors are trying to get their hands on the world’s largest crypto. But, as Bitcoin’s total supply is only 18,809,250 BTC, the added demand pushes the price per BTC up, so the crypto market could be in for another upwards rally. 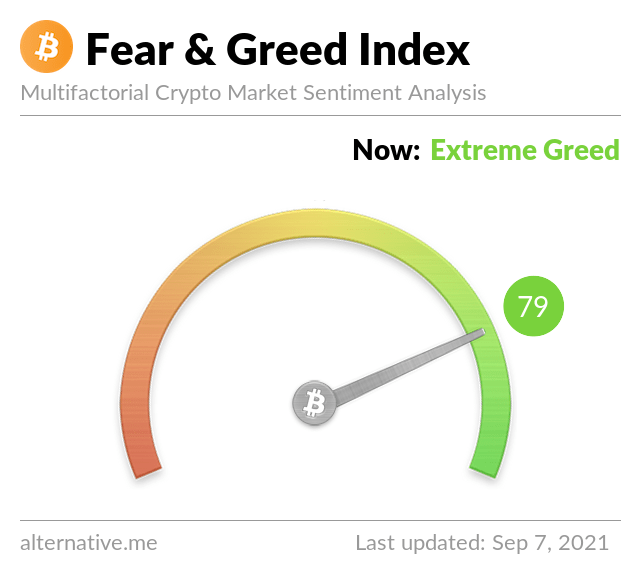 Тhe spike to Bitcoin’s three-month high of $52,853.76 made market analysts believe that the price of the digital asset may reach $100,000 per BTC by the end of 2021. The statements are backed by accumulation patterns, pointing towards $100,000 as a possible endpoint for Bitcoin's yearly rally.

However, since its three-month high, the largest crypto to date lost some ground, trading at $49,046.17 per BTC as of press time.