Litecoin‘s founder Charlie Lee shared the exciting news with users in a recent tweet and added that in the feature the platform would also support SMS payments in the future. 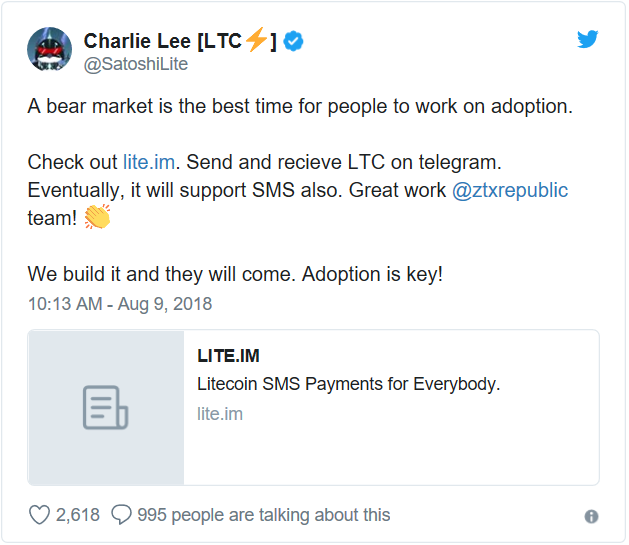 Zulu’s team announced that its backend LTC API system is designed to enable people to use Litecoin services with text queries. Furthermore, they can send LTC to others who do not own a Litecoin wallet and even if the recipient is new to cryptocurrencies.

The app is considered as one of the most secure messenger applications in the world. Customers can easily access their LTC balance and send coins to a wallet or an email address. RSA encryption and user’s password shield their data.

Later on, Telegram will support text messages (SMS) explicitly targeting users with a poor internet connection. The research concludes that 64 percent of the global population has a mobile phone, but nearly half of it, precisely 33% own a phone with an internet connection.

Zulu Republic is wholly focused on the decentralized nature of the feature and aims to include countries with a limited internet connection and web censorship. The privacy is built by default, and the company does not manage private keys.

Registration is quick and straightforward. It requires only a valid email address and a phone number. A bot is assisting through all the steps of the operation. After an SMS code verification, a key wallet is sent, and users can see their balance in LTC and USD.

Currently, Litecoin stands as the seventh cryptocurrency by market capitalization. The project was released in 2017 and quickly gained popularity because it provides faster and cheaper transactions than most cryptocurrencies.