Ripple officials noted that as of press time, Ripple’s 350+ partnerships make its network among the largest in the blockchain industry. 2019 also saw one of the biggest partnerships between financial institutions and blockchain companies, as the second-largest money transfer company in the world – Moneygram joined forces with Ripple in the summer of 2019. Currently, 15% of MoneyGram’s transfers to Mexico are processed via Ripple’s XRP token.

Ripple’s CEO Brad Garlinghouse stated that his plans include an increase in the adoption rate by 30-40% in 2020.

Meanwhile, Asheesh Birla - Ripple’s Vice President of Product and Corporate Development stated that Ripple’s On-Demand Liquidity (ODL) platform could have a strategic impact on revitalizing the global economy after the COVID-19 outbreak.

According to Birla, faster and cheaper remittance services are the key to reviving economies, as citizens can easily send and receive funds across borders.

“In contrast with the pre-funding mechanisms used in traditional remittance, Ripple’s ODL solution eliminates the need of pre-funding, while simultaneously providing the speed and cost-effectiveness of RippleNet and XRP.”, Birla added.

The adoption of cryptocurrencies also accounted for a larger search interest among users in Africa and South America. Blockchaincenter interactivity map shows increased Google searches for Bitcoin in these regions.

Google Trends data, collected by the aforementioned company, revealed that 94,7 percent of all crypto-related search terms in Africa are connected with Bitcoin. A similar percentage is present in Brazil also, with a 92,6% Bitcoin dominance in the crypto-related searches. 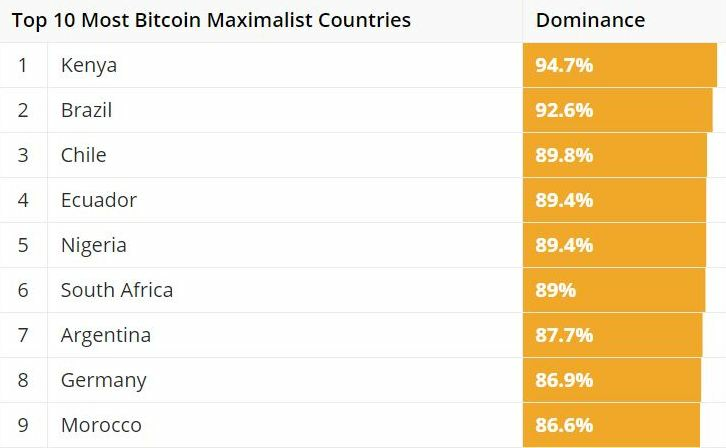 The search result dominance may indicate Africa and South America can become strategic crypto hubs in the future.

The recent Coronavirus pandemic sparked an increase in demand in the more-developed regions of South America and Africa, as peer-to-peer trading volumes in Venezuela, Chile, and Argentina peaked, hitting all-time highs.