SX Network, The World’s First Polygon Edge Blockchain, Will Support And Accelerate The Growth Of The More Than 20 Applications Set To Launch On The Network

The financing round was led by crypto venture fund Hack VC with several other investors in this round, including funds CMCC Global, Nascent, FJ Labs, and several prominent crypto angel investors including the founder of UMA Hart Lambur, and Betfair Co-Founder Josh Hannah, among many others. Polygon participated as well, providing a $2.5 million grant. 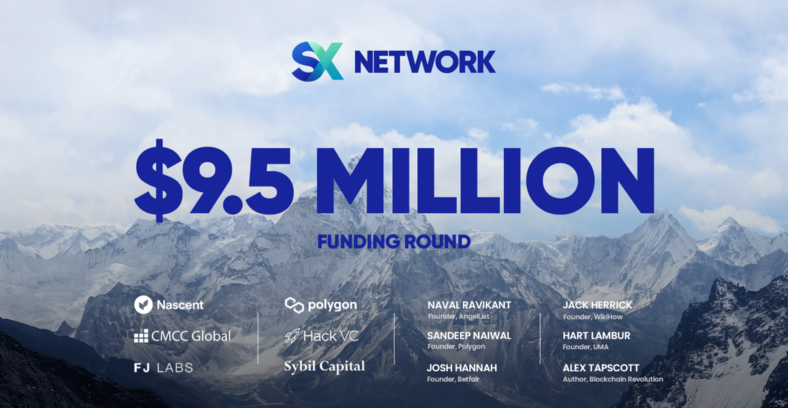 SX Network, creator of the world’s largest blockchain prediction market, is the first blockchain to launch on top of the Polygon Network via Polygon Edge. SX Network is specifically engineered to scale betting, decentralized finance (DeFi), and non-fungible token (NFT) applications with over 20 such projects set to launch on the network.

SX Network fully controls the SX prediction market protocol and its associated decentralized application, SX.bet (formerly SportX). SX Bet has processed $175 million in trades across ~900,000 bets since its launch. With over $100 million of these trades taking place in the last six months, SX.Bet is the largest blockchain-based prediction market in the world.

SX Network’s leadership in decentralized prediction protocols also positions it as the likely platform of choice for prediction-market based governance (known as Futarchy), a solution for effective Decentralized Autonomous Organizations (DAO) governance.

“We are thrilled to welcome these new partners and investors to our project. We are all aligned in our mission to build a scalable platform for Web3 betting, DeFi, and NFT products. Being the first Polygon Edge blockchain to launch gives us a first-mover advantage, which we are eager to take advantage of.”

SX also deployed a custom governance token – the SX token, which is used for paying transaction fees, used as the staking bond by validators, and to power governance. SX has a large staking community, with hundreds of SX holders. Finally, SX has a rapidly growing ecosystem of developers, with 25 different 3rd party teams building protocols and apps on SX Network.