Tesla Sells 75% Of Its Bitcoin, Which Pushed BTC Price Down

Meanwhile, Experts Are Predicting The Bear Cycle To Continue For Another Six Months

Bitcoin, the world’s largest cryptocurrency to date, yet again witnessed a wave of volatility, as the price per BTC fell down from $24,196.82 to a current price point of $22,736.9 per BTC in just 24 hours.

One of the biggest reasons for the drop is that Tesla CEO Elon Musk announced that the car manufacturer sold three-quarters of its Bitcoin holdings in order to improve cash reserves and liquidity, especially after the 22-day COVID Shanghai factory shut down in April.

“The reason we sold a bunch of our bitcoin holdings was that we were uncertain as to when the covid lockdowns in China would alleviate, so it was important for us to maximize our cash position,” Musk noted, emphasizing that the sell-off is not a verdict for Bitcoin’s future, but rather a move to improve overall liquidity.

Furthermore, Tesla may have been selling their BTC holdings at a loss, as Tesla CFO Zach Kirkhorn said the company made a small profit on its Bitcoin sale, but the overall losses from Bitcoin are estimated at around $106 million.

Is Tesla in trouble?

A further delve into the quarterly reports from the EV manufacturer reveals that the April shutdown in Shanghai pushed Tesla’s car production down 15% from Q1 2022 —the biggest quarter-to-quarter drop since the start of the pandemic. 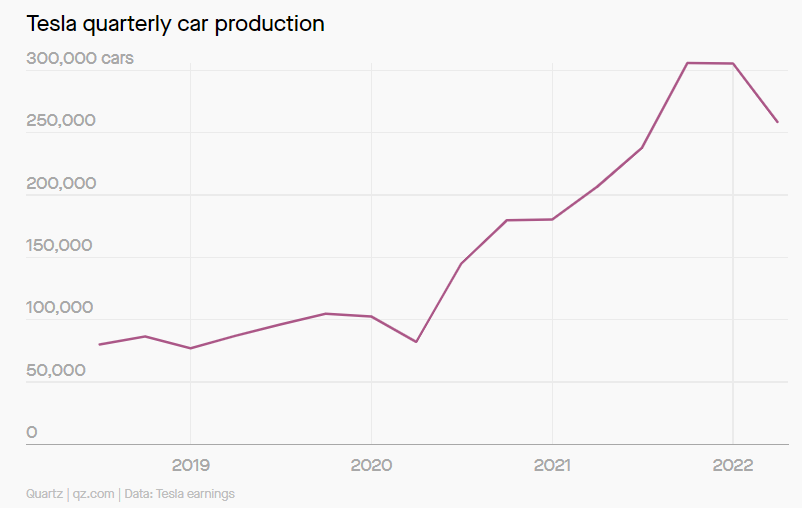 In turn, Kirkhorn stated that currently Tesla is “working through the ramp inefficiencies of our new factories, which are progressing well, but have had an impact on margins as those factories come online.”

However, the large investments and the decline in car sales pushed Tesla’s operating profits to drop nearly a third last quarter, the biggest drop since 2019.

Bitcoin reacts to the sell-off

The Bitcoin sell-off caused unwanted stress on the world’s largest crypto, as on Wednesday, the BTC price surged all the way past $24,000.

Technical indicators like the 200-week moving average suggest that Bitcoin could soon detach itself from the major resistance sitting around $22,500. With its current price point and potential, Bitcoin needs to close the week above $28,000 in order to make the 200-week moving average resistance level support for a higher price spike, according to crypto market analyst Rekt Capital.

Meanwhile, Tron founder Justin Sun credited Elon Musk for his decision, as the sell-off could mean that the Bitcoin ecosystem is showing real signs of maturity.

“Market no longer needs to worry about Tesla selling BTC which has been haunting us for a long time. Tesla selling nearly 1 BIL USD worth of BTC shows the liquidity of Bitcoin to all big corps. Tesla completing Bitcoin transactions shows good precedence for all enterprises holding BTC. We believe more big corps will buy in the future. Kudos to Elon Musk!” Sun tweeted.

Bitcoin bears may soon give up

And as Bitcoin still battles the 200-weekly moving average, data from Grayscale suggest that the bear trend in the crypto market is soon to end.

Comparing current data with the previous bear cycle, Grayscale believes that the bear market may continue for an additional 250 days or eight months.

“Bitcoin is 222 days off the all-time high, which means we may see another 5-6 months of downward or sideways price movement.” the biggest digital asset manager in the world stated in its report.

Furthermore, according to the report, the bear market began on June 13, 2022, when the realized price of BTC fell below its market price and the BTC bull surged to its all-time high record.