Chinese search engines are imposing further sanctions on cryptos, as one of the world’s biggest crypto exchanges to date – Binance, Huobi, and OKEx disappeared from SERP results overnight.

The news was announced by Chinese journalist Colin Wu and crypto news site 8BTCNews. This means Chinese officials are tightening the loop and enforcing censorship, especially with the Chinese CBDC project continuing development. 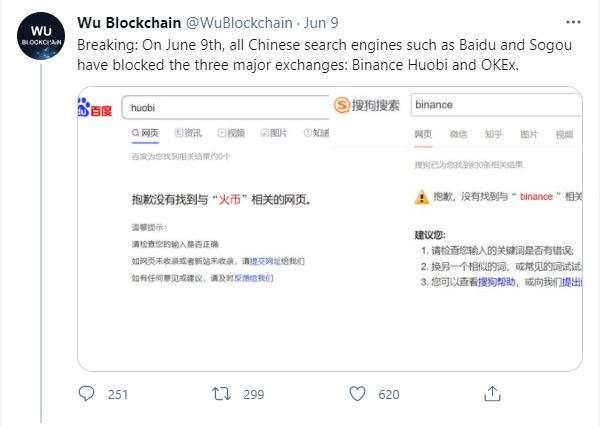 This is the last of series of crypto-related crackdowns, as on June 7, 2021, the Chinese twitter-clone Weibo suspended the accounts of several popular Bitcoin and crypto content creators.

It turns out Chinese search engine giants like Baidu and Sogou stopped showing results for Bitcoin, as well as the names of some of the world’s largest exchanges. The move was quickly followed by services like Weibo and Zhihu.

“At the same time, it was not only search engines that blocked the three major exchanges, but also social media such as Weibo (China's Twitter) and Zhihu (China's quora),” Wu added.

The Chinese authorities crackdown on cryptos seems straightforward, as, on April 27, Beijing sent an “emergency notice” to perform lookups on data centers involved in Bitcoin and other cryptocurrency mining operations.

However, Wu disagreed, calming fears about mining on the mainland.

“This caused some panic in China. However, the Chinese government said it was only conducting an investigation. Data centers are difficult to use for Bitcoin mining, and are mainly used for ETH Filecoin,” Wu noted.

The Chinese state cited the increased carbon footprint of crypto mining. According to China’s 14th five-year plan, the Chinese state implies an 18% CO2 intensity cut, as well as a further 13% from 2021 to 2025.

According to data from the Cambridge Bitcoin Energy Consumption Index (CBECI), Xinjiang is accounted for 35% of China’s Bitcoin hashing power in April, while supplying 23% of the world’s hash rate.

Furthermore, power shortage has been a major reason for Asian miners, as provinces like Sichuan in China, where more than 50% of the total bitcoin hash rate is generated, and countries like Iran, caused panic among crypto miners.

The Sichuan province went after not only mining operators but also after the power stations that supply electricity to these businesses.

Meanwhile, the authorities in Tehran, Iran’s capital, announced that over 450 Megawatts of power is the average consumed by crypto mining companies in Iran. That much power could be sufficient for a town with 100,000 citizens.