Meanwhile, Facebook May Be Soon Delving Into Its Own Metaverse, As The Social Media Giant Lifted The Ban On Crypto Ads

Non-fungible tokens (NFTs) have become the new hot topic in the world of cryptos. One of their newest implications – buying and selling virtual land and properties, is among the most popular NFT usage nowadays. 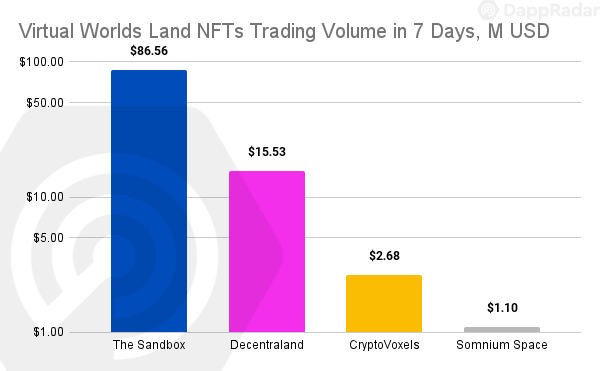 A deeper analysis shows that The Sandbox managed to secure the largest share of weekly volumes with $86.56 million, while Decentraland accounted for $15.53 million. CryptoVoxels and Somnium Space generated $2.68 million and $1.1 million, respectively over the past seven days.

For now, the four projects are existing on top of Ethereum’s blockchain, but the rise of projects like Solana may soon turn out to be placing competitive stress in the metaverse sector.

However, DappRadar stated that the rise of the metaverse projects started as soon as Facebook decided to incorporate its products over the Meta brand.

“However, this is only the tip of the iceberg that pushed the term Metaverse into the mainstream. Virtual worlds carry such enormous potential, and we’re just beginning to see the full array of use cases for metaverse land,” DappRadar added.

“Facebook in their attempt to usurp the narrative of the metaverse caused a chain reaction of other companies not in Web 3.0 (such as Microsoft) to also announce their metaverse strategies and created mass interest and awareness.” Yat Siu added.

Nevertheless, Decentraland proved to be the biggest NFT land seller over the past month, as the metaverse project sold 116 parcels of land in the virtual world’s Fashion Street District selling for 618,000 MANA tokens ($2.7 million currently) on November 23.

Speaking of Facebook, the social media giant reversed the crypto ad ban, stating that it would no longer prevent most cryptocurrency advertisements from appearing on the site.

"We’re doing this because the cryptocurrency landscape has continued to mature and stabilize in recent years and has seen more government regulations that are setting clearer rules for their industry," Facebook stated.

Facebook first banned crypto ads on January 30, 2018, announcing that the ban is set to protect everyday folks who rely on the social network for daily tasks.

Meanwhile, the ban lift coincides with Facebook executive David Marcus announcing his departure from Novi, the Facebook crypto wallet. Marcus was in charge of Novi since 2018 when Facebook announced its plans to create its own cryptocurrency, Diem (ex-Libra), which may soon hit the streets.